The End of Polio 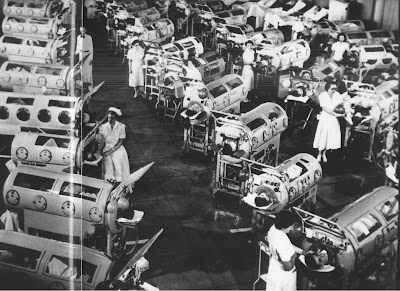 A medical student today will go through their entire career without ever seeing a case of polio. The polio virus was feared throughout the early 20th century, leaving millions paralyzed or dead. During Summer and Autumn, polio epidemics spread human to human with this highly contagious disease. In the 1940's and 50's, negative pressure ventilators called the "iron lung" were used to support patients with paralyzed respiratory muscles. In 1952 the worst polio epidemic struck the United States, with 58,000 cases and 3,145 deaths. Over 21 thousand victims were left paralyzed.

By 1964, the oral polio vaccine, developed by Albert Sabin, had become the recommended vaccine. It was easy to administer and large populations could be vaccinated.

The effort to eradicate polio was launched in 1988 and involved the World Health Organization, Rotary International, the CDC and UNICEF. Through everyone pulling together, more than 210 polio endemic countries were targeted for childhood vaccination. Today only 4 countries - Afghanistan, India, Nigeria and Pakistan have polio. Fewer than 2000 children were paralyzed by the disease in 2006.

If the Global Polio Eradication Initiative is able to stick to its strategic plan, polio will be completely eradicated from the human population. This shows that political will and governments and industry working together can achieve wonderful things for mankind. This initiative had corporate support, pharmaceutical support, non governmental organizations (NGOs), the Gates Foundation and many small countries involved with donating funds to stop polio. Ireland, Bangladesh, Russia, Norway Canada, Germany, the U.K. ,India and the United States were all heavy contributors.

This success story shows that political will, oversight and responsibility are the ingredients for saving our planet. Let the End of Polio show us that we can work together successfully for a common good.

Anonymous said…
I saw thepix and it made me gasp--I was in a place like this when I was 4. Remember little except the little raggy covers they patchworked over me in the iron lung never covered my feet. I wanted them to.
October 31, 2007 at 12:03 PM

Anonymous said…
Vaccines are snakeoil and do not prevent disease. They cause it. Polio stopped when the vector was removed and the vector was contaminated food, fruit vegetables and milk deoending on where you lived. The only cases of polio anywhere in the world today are caused by the vaccine. Don't be fooled by snake oil salesmen.
January 14, 2008 at 9:43 PM

My cousin was a polio victim when he was 3 years old. That makes him paralyzed from legs down to his foot. And I'm so proud of him to stand stronger despite the tragic experience he gone through. Now he is a certified civil engineer, getting his way here in our province. He is a perfect example of someone handicapped but still fought for his chosen career, that everything is possible if you have faith.
January 26, 2010 at 3:13 AM

viagra online said…
Interesting post. I am a medical student too and polio was one of the most dreaded childhood diseases of the 20th century. Polio epidemics have crippled thousands of people, mostly young children; the disease has caused paralysis and death for much of human history. 23jj
April 19, 2011 at 1:00 PM

www.muebles-en-teruel.com said…
Really effective data, thanks so much for this article.
October 12, 2011 at 1:47 AM