Patient Safety- Run the OR Like a Jet Plane 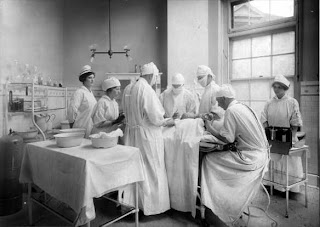 We all know about the poor patient who goes in for a right kidney operation and ends up having the "good" left one removed instead. Or the patient with the allergy who is given the wrong anesthesia and has a reaction. Or the patient who is given the wrong blood type. These things happen despite the fact that doctors and nurses are doing their very best to heal under really tough circumstances.

I saw a film at a conference that really impressed me about how we need to fundamentally change how we address patient safety and live up to Galen's dictum of "primum non nocere" ("first do no harm.")

The film showed an operating suite, with the scrub nurses, anesthesiologist, surgeon, medical student, radiology tech all gathered around the patient lying on the operating table. Instead of just starting the operation, they stopped for a required "time out". The protocol was rigid.

The circulating nurse identified the patient by name, birthdate, age and what the operation was for. She identified that the preop exam was on the chart and mentioned the allergies. Next the Surgeon formally gave the patient's brief history, other health risks and what his intent was for the operation. The scrub nurse identified herself and pointed out that she had the equipment ready and the specific tools the surgeon would require. The anesthesiologist went next with his name (they are all behind masks, you know) and mentioned the anesthesia was on board. He introduced the medical student and then said the operation could begin.

The formal time out was over and the operation began. It was very proscripted and weird to see, but it was immediately obvious to me that this is how it should be done. A pilot does the same thing before she takes the responsibility for the passengers lives in her hands. All systems are checked and verified formally with the control tower and the co-pilot. Even though the plane has been flown hundreds of times on the same route, a protocol is followed before takeoff.

If I or my family or my patients are scheduled for surgery, I want a team that does a formal "time out" and treats it as seriously as flying a jet plane.

Anonymous said…
That sounds like a great operation where everyone is focused on the patient. I wonder how many places do it that way?
October 24, 2007 at 8:30 PM

Neponset River Bridge Dig said…
great post. This is the way all surgery should be done. That way everyone is on the same page and there is no assuming anything.
October 25, 2007 at 8:09 AM

Jonathan said…
As a licensed pilot, and more importantly as patient, I’m glad to hear that aircraft-style crew resource management (CRM) is being adopted for the surgical suite.

It would be equally reassuring to know that a hospital analogy of an NTSB post-aircraft problem/accident investigation was being adopted as well with the express intent, as in the flying model, of preventing similar problems in the future.

For the curious, an intro to CRM can be found (where else but) here: http://en.wikipedia.org/wiki/Crew_Resource_Management
October 25, 2007 at 9:01 AM