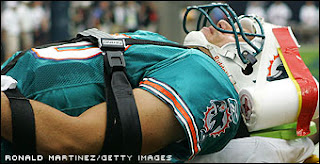 One of my most "googled" blogs was "A bump on the head". Falls and head injuries are common and an estimated 300,000 sports-related concussions (also known as mild traumatic brain injury) occur annually in the United States. Researchers estimate that 63,000 of those occur in high schoolers playing football.

The tough thing about concussions is that there is no marker or test to know if a person has one. With new technology like functional MRIs (fMRI), doctors can see changes in brain function and link those changes to the recovery time needed for injured athletes. With a concussion, fMRI identifies abnormal hyperactivation in specific brain regions that control cognitive process, such as memory. They can provide the first understanding of how a concussion affects the brain.

fMRI machines are scarce and found only at academic medical centers and the cost for a scan can run up to $1200. Until the technology becomes more common, we are left with arbitrary guidelines that are shifting toward a more conservative treatment of young athletes. Coaches, trainers and parents are thinking twice about sending a kid back into play too soon. Any insult to the head that results in a temporary or transient change of mental state (even if there is not loss of consciousness) needs to be labeled a concussion.

The problem remains that there are no symptoms or signs that can predict when it's safe to return to play. We don't have any evidence to guide us but if early studies with fMRI are an indication, recovery may take longer than we originally thought.