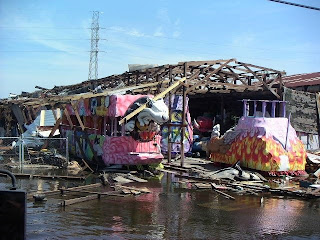 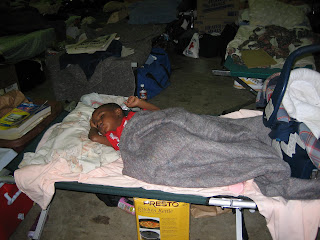 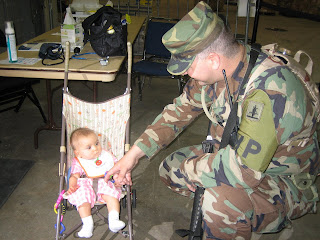 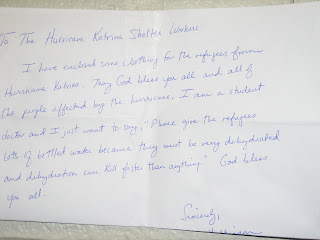 Exactly three years ago today we were glued to our TV sets watching the horror unfold in that unique American city, New Orleans. The unthinkable was happening...an entire city was under water and tens of thousands of people were stuck on rooftops, abandoned on freeways and inside the superdome in stifling heat with no provisions. It was such a shock. Within 24 hours I heeded an email call for help and found myself on a red-eye to Baton Rouge, where all flights were landing. President Bush's Air Force 1 was on the tarmac and he was doing a "good job, Brownie" photo op. The governor and Mayor were belatedly begging for help and the national guard was deploying much needed security and manpower.

Registering at the large relief command center and getting a waiver to practice medicine in Louisiana was the last organized function I witnessed. Hundreds of volunteers were streaming in, and help was needed, but there was no way to dispatch them to the needed areas. No-one ever seemed to be in charge and there was no coordinated communication.

Fema contracted with American Medical Response Ambulance company and there were dozens of EMTs ready and poised for action. But we didn't have GPS or maps and we were lost on the streets of New Orleans. A local sheriff in the 9th Ward became our map and guide and we, in turn, took a side trip to his parents home where we recovered 3 bodies...his mom, dad and a neighbor. The devastation in that area was surreal and it looked like an abandoned ghost town. The only life was an occasional snake slithering in the mud or a sad, sick animal looking for its owner.


My work varied according to need. First I helped set up the medical area in the evacuation center and began taking care of 5000 victims of the flood. They had only the clothes on their back and we spent time trying to piece their medical issues together and distribute much needed medication for diabetes, hypertension, pregnancy and mental illness.

The evacuation center in Baton Rouge was run by the Red Cross and they effectively fed 5000 people and provided cots and security and air conditioning. I was impressed with the Red Cross because this was a massive task. The temperature was 100 º with humidity as high. The people and churches of Baton Rouge opened their hearts and doors to rescue volunteers and fed us in the wee hours of the morning when we ended our work. It was an example of people helping people and everyone was at their best. When I needed a small refrigerator to hold medication at the medical tent, the local family who housed me delivered one within 24 hours. I witnessed nothing but generosity under terrible conditions.


Other need took me into New Orleans with medical support for the EMTs doing search and rescue and then, search and recovery. Even the volunteers were having medical issues...one local man suffered a heart attack on the deserted streets but there were no local hospitals open for business. We stabilized him and transported him back to an outlying town. Don't be fooled by these stories...it was really chaotic with inadequate communication in the field.

Now Mayor Nagin is effectively evacuating some of these same people in preparation for Hurricane Gustav. Buses are rolling and they are taking no chances. 15,000 residents have already evacuated and they are focused on St. Bernard's Parrish, which was totally wiped out by Katrina and the storm surge.

Senator McCain plans a visit with his new cute running mate and President Bush won't make the same mistake twice of ignoring a major American city. This is great because if we don't learn from the tragic mistakes of Katrina we truly deserve to be called a third world country and not a "superpower". Third world countries have no safety net. They have armies and military but few social programs. I believe the USA can do better.

Raymond Bouchayer said…
The sad part about it is that it is not a question of Bush not doing the same mistake as Katrina , but that it is an election year and he and McNugget and his right to life gun totting Mama are going to make sure that they look like they care so much .....But of course what do you expect of a party that completely destroyed our economy and prestige around the world. They only act in order to look good ....
August 31, 2008 at 2:38 PM

Anonymous said…
What are the colored things in the first photo, it looks like a cat on the front of one. Do you have any idea what the structure was before?
September 1, 2008 at 9:47 AM

Toni Brayer, MD said…
Anon: The first photo is mardi gras floats...underwater. The next two photos are at the evacuation center (a sports complex) in Baton Rouge where more than 5000 victims lived for months. The last photo is a sweet letter sent to our evac center. click on it for a better view.
September 1, 2008 at 10:09 AM

Anonymous said…
Thank you for a first hand account of an amazing chapter in American history. God bless the people of New Orleans.
September 1, 2008 at 10:10 AM

Home Security said…
It’s an interesting approach. I commonly see unexceptional views on the subject but yours it’s written in a pretty unusual fashion. Surely, I will revisit your website for additional info.

Atlanta Home Security said…
I'm impressed. You're truly well informed and very intelligent. You wrote something that people could understand and made the subject intriguing for everyone. I'm saving this for future use.

Houston Home Security said…
I really like your writing. Thanks so much, finally a decent website with good information in it.
October 26, 2011 at 6:56 PM

Unknown said…
Your blog article is very interesting and fanatic, at the same time the blog theme is unique and perfect, great job. To your success, one of the more impressive blogs I've seen. Thanks so much for keeping the internet classy for a change.

Smart Home said…
Lately I came to your website and have been reading along. I thought I would leave my initial comment. Keep writing, because your posts are impressive!
November 16, 2011 at 10:42 PM

ODB2 said…
Your weblog appears pretty informative. I liked it. So a awesome provide pretty beneficial material. I appear at with awesome interest.Can you please inform me how can I appear at your rss blog?
December 6, 2011 at 12:16 AM