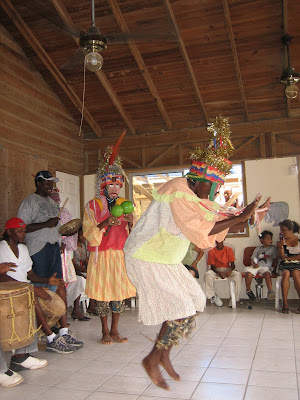 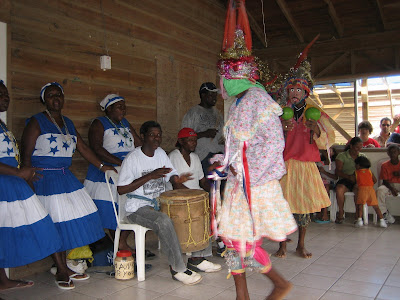 Garifuna or Black Caribs are communities living on the Caribbean coast of Central America. In 1635 two Spanish ships carrying slaves to the West Indies were ship-wrecked near St. Vincent. The escaped slaves were welcomed and protected by the indigenous Carib Indians. Their intermarriage formed the Garifuna of today. In 1797 the British relocated all the Garifuna along with some black slaves to the island of Roatan in Honduras. From there they have spread to Belize and Guatemala. Their language and religion remain similar to those found among their ancestral peoples of the Amazon and their dances and heritage show a strong African Influence.

Many of these Afro-Caribbeans live in Punta Gorda, where the Siempre Unidos HIV clinic is located. They performed their cultural drumming and dancing for us at a fiesta the last day we worked at the clinic. Wearing traditional costumes, the men in masks leaped and danced while the women sang. It was a wonderful display of culture and history.

Anonymous said…
Thank you for sharing your photos and educating us about the interesting history and culture of Roatan and Punta Gorda people and what their life is like.

Ir is wonderful that they had you their to volunteer all your medical experiance and treat them.
KM
August 14, 2008 at 4:14 PM

viagra online said…
Black Caribbeans communities in Central America are so interesting, I went to Costa Rica Two years ago, I ate something called "rice and beans", but something called my attention, it was a food called "pati", oh my Gad , so delicious!22dd
March 11, 2011 at 10:11 AM

kamagra oral jelly said…
Great pictures, I love the culture of some people around the world, they managed to maintain its traditions for many years and years.
April 5, 2011 at 10:58 AM

Invertir en oro said…
I think it's important that we all know a little about this subject so interesting, I think it's part of human culture tell us about such things.
Invertir en petroleo
April 14, 2011 at 11:05 AM