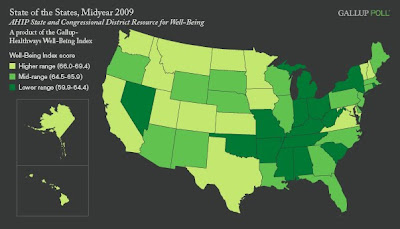 A Gallup poll is done each year to rank the best and the worst states for population "well-being". The well-being index score is an average of of six sub-indexes which examine life evaluation, emotional health, work environment, physical health, healthy behaviors and access to basic necessities. They interviewed more than 170,000 adults over age 18. This "first half of the year" report is a precursor to the annual report. Maybe it isn't too late to make changes and get your well-being up.

Americans in Hawaii and Utah continued to lead the nation in well-being in the first half of 2009, with the two states having switched places since 2008. West Virginia and Kentucky maintained their status as the states with the lowest well-being.

Four of the top 10 scoring states -- Iowa, North Dakota, Kansas, and Minnesota -- are in the Midwest. As in 2008, many of the states with lower Well-Being Index scores are located in the South. Nevada is the only Western state in the bottom 10.

I'm not sure what relevance this has to daily life, but it is interesting and it confirms for me that Hawaii is my favorite state.