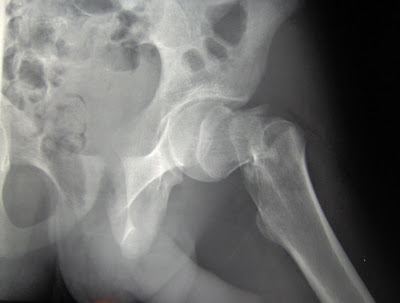 A study was published this week in JAMA that shows the incidence of hip fractures has been steadily declining in Canada and the United States from 1985 through 2005. The study surprised the medical profession because even through their were more older people in the population, there were actually fewer hip fractures. This is great news because when older people fall and fracture their hip, a large percentage never walk again and it is a downward spiral to a nursing home and death.

No-one knows the reasons for the decline but there are some good theories. Since health and nutrition play a big role in bone strength, perhaps better nutrition throughout the past 20 years has made osteoporosis (bone loss) less prevalent. A greater bone mass means less chance of fracture. Adding to this theory is that heavier people have greater bone mass and we all know we are getting fatter and fatter.

The bisphosphonate medications may also have played a role. Fosamax, Actonel, Boniva came on the scene in the mid 1990's. They are taken by less than 20% of older women for osteoporosis and preserving bone, so the effect is likely small. But more women took Estrogen replacement (HRT) during those years so that might have impacted bone health and prevented fracture.

The war against smoking has ramped up over the past 30 years and cigarettes are linked to osteoporosis and weak bones also. I think the decline in smoking has played a role too.

It is probably a combination of things that has led to the decline in hip fractures since 1985. The body is a complex organism and many environmental and lifestyle factors impact how healthy we are and how long we live.