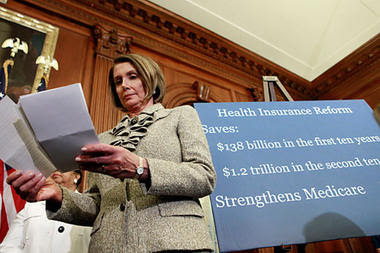 Well, it is an historic day as health reform has finally passed. Yes, it is a watered down bill that leaves much to be desired but...it is a start. After months of stops, starts, rhetoric, fear mongering, empty promises and long, heated debate, many Americans are not sure of what just passed. It will have different effects on different people and many of the provisions are delayed until 2014. Here are a few features of the new bill:

The new bill will extend coverage to 32 million Americans, expand the government health plan for the poor, impose new taxes on the wealthy and bar insurance practices like refusing to cover people with pre-existing medical conditions, according the the New York Times.

That all sounds pretty good to me.

KM said…
Thanks for writing about this and breaking it down in a clear, concise way. Your poll should say if it should be answered before or after reading your latest article.
March 23, 2010 at 3:54 AM

Anonymous said…
As you stated, "It's a start". What a polarized bunch of Republicans in Congress. Was there not one, who could see the advantages to his (or her) fellow Americans? I guess not.
March 23, 2010 at 11:22 AM

Michael Kirsch, M.D. said…
Count me as a skeptic. I think that health care costs will continue to explode and that the plan won't deliver as promised. Thrity two million uninsured will now be covered, but half of them will be in the Medicaid program. While this is still a huge step forward, physicians can barely afford to care for Medicare patients at current rates, and Medicaid rates are 72% of Medicare. I am happy seeing Medicaid patients, but I couldn't afford to run a practice if the volume of these patients increased to a significant degree. When the euphoria ebbs, I think that public opposition and anxiety will rise. Cutting medical costs means restricting care, which is political dynamite. It will be interesting!
March 23, 2010 at 2:54 PM

Anonymous said…
As you stated, "It's a start". What a polarized bunch of Republicans in Congress. Was there not one, who could see the advantages to his (or her) fellow Americans? I guess not.

Oddly enough, opposition to the law was bipartisan. It's hard to claim that the Republicans were unreasonably polarized when a significant number of Democrats agreed with them.
March 30, 2010 at 3:13 PM

Greta said…
For every good idea which could have had bipartisan support, there are huge problems with this mess of a bill. If the democrats had not started out saying we won and you lost so we are going to pass our 50 year old dream down your throats, it might have had a chance of actual reform. Instead we got this which is going to cost a lot of democrat seats bringing the republicans back into power. They have the power of the purse if in power and can defund the areas that are really bad. As Dr Kirsch said, doctors cannot take even lower amounts, especially with the increased mandates coming their way, and survive. So watch out folks, if you are on one of these government plans, you might find it hard to get a doctor.

Healthcare has been screwed up since government got involved and anyone who thinks the federal government can fix healthcare is obviously not paying attention. name a single government program that operates on budget, is sustainable, is consumer friendly, and does not raise taxes which kill jobs.
March 30, 2010 at 7:22 PM

link wheel said…
Assets just like the one you talked about here might be very helpful to me! I will submit a link to this page on my blog. I am positive my guests will discover that very useful. Big thanks for the helpful info i discovered on Domain Information Anyway, in my language, there should not much good source like this.
March 31, 2011 at 1:57 AM

linkwheel said…
Please inform me it labored right? I dont want to sumit it once more if i should not have to! Either the weblog glitced out or i am an idiot, the second option doesnt shock me lol. thanks for an amazing blog! Anyway, in my language, there are usually not a lot good supply like this.
March 31, 2011 at 2:37 AM

sim so dep said…
Incredible post! This could help numerous people discover out about this matter. Do you wish to incorporate video clips along with these? It could undoubtedly assist out. Your cause was spot on and owing to you; I in all probability won't have to describe all the things to my pals. I can merely direct them here. Anyway, in my language, there are usually not a lot good supply like this.
March 31, 2011 at 6:52 PM

so dep said…
Howdy, i learn your weblog occasionally and that i own an analogous one and i used to be simply wondering for those who get numerous spam feedback? In that case how do you forestall it, any plugin or anything you may advise? I get a lot recently it is driving me mad so any help could be very a lot appreciated. Anyway, in my language, there are not a lot good source like this.
March 31, 2011 at 8:43 PM

cyprus company formation said…
This is the first time i'm visiting your health blog. I'm very impressed by writing skills. Also all the articles are very informative and easy to understand
April 9, 2011 at 5:19 PM

Cheap Viagra said…
I hate this new reform, I mean if before we are paying for a horrible health service, in this moment we paying for a worst service, and the worst part, paying more.
April 12, 2011 at 1:57 PM

Anonymous said…
I could tell that we’re on the same interest and obsession. Good to know someone I could share my ideas. Looking forward to know and learn some more from you. I'll be glad to share my own thoughts to you soon. Thank you for sharing such valuable articles. More power!

iservepharmacy said…
I'm so impressed with he thousands of policies people have to pay, I think that's more than we should pay, I man that's ok but all of them should be moderated.
July 22, 2011 at 7:46 AM

sim dep said…
Glorious data here. This interesting post made me smile. Possibly should you throw in a few pictures it would make the entire thing extra interesting. Anyway, in my language, there usually are not much good supply like this.
December 25, 2011 at 11:31 PM

sim số đẹp said…
Your weblog is fine. I simply need to comment on the design. Its too loud. Its doing method too much and it takes away from what youve got to say --which I feel is admittedly important. I dont know if you happen to didnt suppose that your phrases may hold everyones attention, however you have been wrong. Anyway, in my language, there usually are not much good source like this.
January 2, 2012 at 2:08 AM

Sim 10 so said…
Wonderful learn, I simply handed this onto a colleague who was doing some research on that. And he actually purchased me lunch because I discovered it for him smile So let me rephrase that: Thanks for lunch! Anyway, in my language, there should not much good source like this.
January 11, 2012 at 7:07 AM

Sim viettel said…
Your weblog is fine. I just wish to comment on the design. Its too loud. Its doing way an excessive amount of and it takes away from what you received to say --which I feel is basically important. I dont know if you happen to didnt suppose that your phrases could maintain everyone attention, however you had been wrong. Anyway, in my language, there aren't a lot good source like this.
February 3, 2012 at 4:05 AM