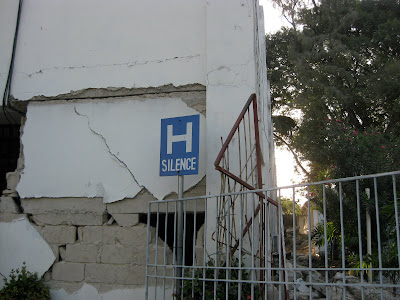 I can't get the stories of Haiti out of my mind.

A patient showed up at the Port au Prince hospital ward with a massive left sided paralysis, an obvious stroke. This 48 year old woman had collapsed the day before and was now accompanied by her three grown daughters, who were most attentive and worried. I examined her in the bed with other patients and families gathered around. (There is no sense of privacy and even an exam seems to be everyone's business in Haiti). One daughter spoke broken English but I had a good translator that helped me get the information I needed.

It was a sad story. They had been on the 5th floor when the Earthquake hit. They fell straight down and dad was killed. One of the children had a crush injury to his leg and the entire remaining family was now "on the street". Just surviving must have been such a strain. Then...mom has a massive stroke.

As I was examining the patient further, one daughter handed me a quickly scrawled note. It read. "I have a problem She have a AIDS" In this private way, the daughter wanted me to know her mom had AIDS.

In a country with such poverty, lack of health care and lack of education, it is not a surprise that HIV and AIDS remains a significant problem and Haiti is the Caribbean island most affected by AIDS. There also remains a stigma and HIV infection is a big secret. Once I asked my Haitian interpreter to ask an emaciated patient if he was HIV positive and the interpreter couldn't even ask the question. It is just not done. It was a real act of bravery for that daughter to pass me the secret note.

Needless to say, AIDS will be the least of this family's problem. I can't begin to imagine how a woman with a stroke, who will likely not receive any rehabilitation, can live on the street. By the time I left, she needed 2 people to assist her out of bed into a chair...where she could not sit straight.

This is the continued tragedy of the Earthquake and the aftermath of human misery it left.

KM said…
I wonder if any group has contacted a company that makes wheelchairs, walkers, canes and crutches to see if some can be donated for these Haitian patients? I had also wondered if any Physical, therapists were going to be able to go there to volunteer their expertise.

I especially related to this because of helping take care of my father for four years after a severe stroke causing permeant paralysis on the left side. Can't imagine being homeless and no rehab. on top if it.
March 20, 2010 at 11:30 AM

StorytellERdoc said…
Thank you for all you are doing over in Haiti. I can only imagine the heartbreak you are seeing.

viagra online said…
is a very sad story, the truth is that whenever tragedy strikes hardest at the poor, I hope that the family would have helped
May 7, 2010 at 9:48 AM

cialis online said…
I've been reading a lot about this ill and people with AIDS also have an increased risk of developing various cancers such as Kaposi's sarcoma, cervical cancer and cancers of the immune system known as lymphomas. 23jj
March 29, 2011 at 9:28 AM

link wheel said…
Properly, this is my very first go to to your weblog! We're a gaggle of volunteers and starting a brand new initiative in a neighborhood throughout the same niche. Your weblog provided us helpful info to work on. You will have carried out a marvellous job! Anyway, in my language, there aren't much good source like this.
March 31, 2011 at 1:57 AM

linkwheel said…
Sources like the one you talked about right here can be very useful to me! I'll put up a hyperlink to this web page on my blog. I'm positive my visitors will find that very useful. Massive thanks for the helpful info i found on Domain News Anyway, in my language, there will not be a lot good supply like this.
March 31, 2011 at 2:43 AM

sim so dep said…
I've to say, I dont know if its the clashing colors or the bad grammar, but this blog is hideous! I simply, I dont wish to sound like a know-it-all or anything, however may you will have probably put just a little bit extra effort into this subject. Its really interesting, however you dont characterize it well at all, man. Anyway, in my language, there usually are not much good supply like this.
March 31, 2011 at 6:53 PM

so dep said…
I've been attempting to Achieve access to this website for a while. I used to be using IE then after I tried Firefox, it worked simply advantageous? Just needed to carry this to your attention. This is really good blog. I've a bunch myself. I actually admire your design. I do know this is off subject but,did you make this design yourself,or purchase from someplace? Anyway, in my language, there are not a lot good source like this.
March 31, 2011 at 8:44 PM

sim dep said…
Sources like the one you talked about right here can be very useful to me! I'll put up a hyperlink to this web page on my blog. I'm positive my visitors will find that very useful. Massive thanks for the helpful info i found on Domain News Anyway, in my language, there will not be a lot good supply like this
December 19, 2011 at 9:10 AM

so dep said…
Sources like the one you talked about right here can be very useful to me! I'll put up a hyperlink to this web page on my blog. I'm positive my visitors will find that very useful. Massive thanks for the helpful info i found on Domain News Anyway, in my language, there will not be a lot good supply like this.
December 23, 2011 at 10:16 PM

sim số đẹp said…
Hello, I saw a three of your attention-grabbing posted posts and needed to ask in the event you would be interested in reciprocal pages? Crew have weblog about alexis texas ass! Anyway, in my language, there usually are not much good supply like this.
January 1, 2012 at 3:30 AM

Sim 10 so said…
Great write-up, I am a big believer in commenting on blogs to help the weblog writers know that they?ve added something worthwhile to the world wide web! (source roblox-cheats.com). Anyway, in my language, there should not much good supply like this.
January 9, 2012 at 10:24 AM

Sim viettel 10 so said…
Assets just like the one you talked about here might be very helpful to me! I will submit a link to this page on my blog. I am positive my guests will discover that very useful. Big thanks for the helpful info i discovered on Domain Information Anyway, in my language, there should not much good source like this.
January 19, 2012 at 10:32 AM

Sim viettel said…
Your weblog is fine. I just wish to comment on the design. Its too loud. Its doing way an excessive amount of and it takes away from what you received to say --which I feel is basically important. I dont know if you happen to didnt suppose that your phrases could maintain everyone attention, however you had been wrong. Anyway, in my language, there aren't a lot good source like this.
February 3, 2012 at 12:08 AM