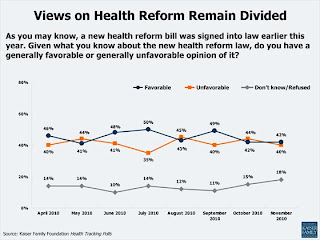 While most Republicans believe the new health law will be repealed, the Health and Human Services Secretary, Kathleen Sebelius says "there is no going back".  Reform is in turmoil after a federal judge in Virginia ruled the individual mandate unconstitutional.  Two other federal judges of equal stature have upheld it,  so confusion prevails with policywonks and the public.

The federal mandate says all Americans must maintain health insurance.  Secretary Sebelius says, "I think discussions are likely to go forward, but most Americans find the practice of saying to sick Americans or those who may be sick or those whose children are sick 'you cannot participate in the health insurance pool' really reprehensible."

She also said, "Instead of making health insurance more available, more affordable to an estimated 32 to 35 million Americans, repeal would make sure insurance was even further out of reach and that our costs continue to skyrocket," Sebelius said.  She added, "We can't return to the days where over the last 10 years insurance charges went up 131% and people have less coverage and less options."

Many think the new health law challenges will make it all the way to the Supreme Court. 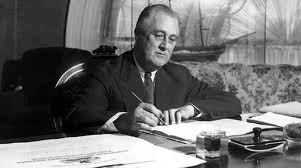 When you look at history, there are similarities with the "New Deal" from President Franklin D. Roosevelt and the Social Security Act.  He initiated it between 1933 and 1938.  In 1939 a survey of the American people asked, "Do you think the attitude of the Roosevelt administration toward business is delaying business recovery?" The American people responded "yes" by a margin of more than two-to-one and business felt even more strongly.  Legislators fought the child labor amendment, the banking reform act and the new deal relief programs as "almost the complete Communistic form of government".   New Deal opponents said "if we adopt an old age pension, we are taking another step toward destruction."

The Social Security Act was settled in a set of Supreme Court decisions that moved America toward other industrialized nations in offering old-age pensions and unemployment compensation.  We must remember how complex that bill was.  All Americans had to be issued social security numbers, taxes were withheld, field offices were set up, States had to cooperate.

Could the New Deal be accomplished in the present contentious bi-partisan climate?  Will we move forward with health reform or maintain the status quo?

Michael Kirsch, M.D. said…
I think we will move forward, but it will be a zig-zag, not a straight shot to the president's goal line. Keep in mind that only 43% of Americans approve of the passed health care law. Most of us are against all of it or part of it. I don't think we should expect any bipartisanship on this issue. The GOP will exploit the public's legitimate anxiety over this issue. Very nice post.
December 22, 2010 at 9:32 AM

BrainDame said…
How many Americans do or don't support Health Care reform depends entirely on who asks what questions? Even the most fiscally conservative patients of mine bemoan the exorbitant rise in health insurance costs and amazing difficulty negotiating the system. Even my most liberal patients want to maintain significant autonomy over choice in health care and are considered about the potential government costs...nuff said
December 25, 2010 at 11:35 AM

web agency milano said…
These all things are really very great and also good for the social security it can be prevails with policy in all these there are so many things which is great to know about it.
December 27, 2010 at 12:47 AM

lax airport hotels said…
For health insurance cost that can be negotiating the system that can be liberal for the patients it can be really very good to maintain.
December 29, 2010 at 2:42 AM

linkwheel said…
Great write-up, I am a big believer in commenting on blogs to assist the weblog writers know that they?ve added one thing worthwhile to the world large net! (source roblox-cheats.com). Anyway, in my language, there aren't a lot good source like this.
March 30, 2011 at 7:05 PM

link wheel said…
I used to be searching for crucial information on this subject. The knowledge was necessary as I am about to launch my own portal. Thanks for providing a lacking link in my business. Anyway, in my language, there are usually not much good source like this.
March 30, 2011 at 8:18 PM

sim so dep said…
Have you ever thought-about including extra videos to your weblog posts to maintain the readers extra entertained? I mean I just read through the entire article of yours and it was fairly good but since I am more of a visual learner,I discovered that to be more helpful well let me know the way it seems! I love what you guys are at all times up too. Such intelligent work and reporting! Keep up the good works guys I've added you guys to my blogroll. It is a great article thanks for sharing this informative information.. I will visit your blog often for some newest post. Anyway, in my language, there usually are not much good supply like this.
March 31, 2011 at 2:31 AM

so dep said…
Utterly understand what your stance in this matter. Though I'd disagree on some of the finer details, I feel you probably did an awesome job explaining it. Sure beats having to analysis it on my own. Thanks. Anyway, in my language, there aren't a lot good supply like this.
March 31, 2011 at 2:40 AM

bp claims said…
Thank you for the wise bp claims. Me & my bp claimshave been getting ready to do a little analysis about that. bp claims We received an excellent guide on that bp claimsfrom our local library and most books where not as bp claims as your information. I am very glad to see such bp claimswhich I used to be searching for a protracted time bp claims.This made very glad! Anyway, in my language, there aren't a lot good source like this bp claims.
April 25, 2011 at 2:57 AM

sim so dep said…
Even the most fiscally conservative patients of mine bemoan the exorbitant rise in health insurance costs and amazing difficulty negotiating the system. Even my most liberal patients want to maintain significant autonomy over choice in health care and are considered about the potential government costs...nuff said
July 20, 2011 at 1:50 AM

www.muebles-en-lugo.com said…
Quite effective material, lots of thanks for the article.
October 6, 2011 at 8:38 AM

sim so dep said…
Utterly understand what your stance in this matter. Though I'd disagree on some of the finer details, I feel you probably did an awesome job explaining it. Sure beats having to analysis it on my own. Thanks. Anyway, in my language, there aren't a lot good supply like this.
December 18, 2011 at 1:17 AM

sim số đẹp said…
I feel is basically important. I dont know if you happen to didnt suppose that your phrases could maintain everyones attention, however you had been wrong. Anyway, in my language, there aren't a lot good source like this.
January 1, 2012 at 12:04 AM

Sim 10 so said…
Properly, this is my very first go to in your weblog! We're a gaggle of volunteers and starting a brand new initiative in a community throughout the same niche. Your weblog supplied us helpful info to work on. You could have carried out a marvellous job! Anyway, in my language, there will not be a lot good source like this.
January 8, 2012 at 10:31 PM

Sim viettel 10 so said…
Wonderful learn, I simply passed this onto a colleague who was doing some research on that. And he really bought me lunch because I found it for him smile So let me rephrase that: Thanks for lunch! Anyway, in my language, there are not much good supply like this.
January 17, 2012 at 10:41 AM

Sim viettel said…
People are always looking for natural ways to stay healthy and lower cholesterol. Chinese red yeast rice supplements has been touted as a safe and natural way to lower cholesterol than statins. Yeast, which grows particularly rice contains a family of substances called monocolins, which lowers cholesterol by blocking cholesterol production in the liver in the same way as prescription statins.
February 1, 2012 at 10:56 PM

Sim viettel so dep said…
I've been making an attempt to Gain entry to this web site for a while. I used to be utilizing IE then once I tried bp claims, it labored just effective? Just wanted to bring this to your attention. bp claims is actually good blog. I have a bunch myself. I actually admire your bp claims. I know that is off matter however,did you make this bp claims yourself,or buy from bp claims? Anyway, in my bp claims, there are not much good supply like this bp claims.
February 5, 2012 at 7:16 AM