The New England Journal of Medicine published a new study that shows there is no increased psychologic impact for women who have early abortions.  The researchers from Denmark looked at almost 85,000 women who had first trimester abortions over a 13 year period and compared them with women who gave birth to live babies.  They found that there was no increase in women who sought psychiatric counseling after the abortion from those that sought help before the abortion.  They also found that women who had a baby sought help more frequently in the year after birth than before.

The most common problems among women in both the abortion and the delivery groups were anxiety, stress and depression.

Changes in hormone levels, sleep deprivation and just the demands of caring for a new baby could lead to anxiety and depression.  Women who have abortions don't fact those stresses. 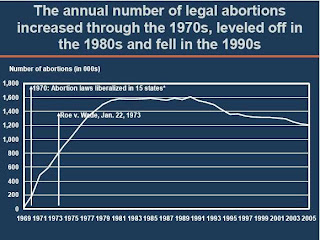 This study confirms what others have found...that having an early abortion does not increase mental disorders, at least not in Denmark.   It would be interesting to do the same study in the U.S. and see if the results held.    Denmark legalized abortion in 1973, the same year as Roe v. Wade in the United States.

Dog crates said…
These all most common problems of women which you can share with us is really very great in all these there are so many things which is great.
January 28, 2011 at 10:24 PM

Frontline Plus said…
The most common problems among women in both the abortion and the delivery groups were anxiety, stress and depression.
January 30, 2011 at 8:40 PM

London escorts said…
It is one of the most common problem for every of the women there are have some of the problems which is cool to know about it.
February 1, 2011 at 2:31 AM

sinus surgery Los Angeles said…
Abortion is not a easy thing to undergo...the mere fact that you are killing a new life without any harm it caused is depressing.there are other worries like whether there would be followed normal pregnancy and others which breed the stress.
February 1, 2011 at 10:27 PM

Unknown said…
Chances are the calcium supplement you are taking now is a rock source of calcium. The label will say "calcium carbonate", which is nothing more than limestone. AlgaeCal Plus contains an organic, plant-sourced calcium form derived from a unique South American marine algae called Algas Calcareas™.
March 7, 2011 at 10:25 AM

link wheel said…
Daniel, yea I can see what you did there. I actually liked that part, but hehe I'm not that harsh like my dad with these things. He at all times tells me crazy stories again in the day and calls me a loser. I assume it's time I transfer out of my parents' basement LOL. Aaanyways, what about you? what does your dad assume xD" Anyway, in my language, there usually are not much good source like this.
March 29, 2011 at 9:09 PM

so dep said…
Properly, that is my very first visit in your weblog! We're a group of volunteers and beginning a brand new initiative in a community within the same niche. Your weblog supplied us useful information to work on. You might have carried out a marvellous job! Anyway, in my language, there are not much good supply like this.
March 30, 2011 at 12:21 AM

sim so dep said…
I was wondering if you want to be a visitor poster on my web site? and in trade you possibly can include a hyperlink your publish? Please reply whenever you get an opportunity and I will send you my contact particulars - thanks. Anyway, in my language, there usually are not much good supply like this.
March 30, 2011 at 1:31 AM

gccf said…
Excellent information here. This attention-grabbing publish made me smile. Possibly when you throw in a couple of footage it's going to make the entire thing more interesting. Anyway, in my language, there should not much good source like this.
April 25, 2011 at 12:51 AM

gulf coast claims facility said…
I have been trying to Gain entry to this website for a while. I was using IE then once I tried Firefox, it worked just effective? Simply needed to convey this to your attention. This is actually good blog. I have a bunch myself. I really admire your design. I know that is off matter however,did you make this design your self,or purchase from somewhere? Anyway, in my language, there usually are not much good supply like this.
April 25, 2011 at 1:01 AM

bp claims process said…
Please inform me it labored proper? I dont wish to sumit it again if i would not have to! Either the blog glitced out or i'm an idiot, the second option doesnt shock me lol. thanks for an ideal blog! Anyway, in my language, there are not much good source like this.
April 25, 2011 at 1:21 AM

bp claims said…
Your blog is fine. I just want to comment on the design. Its too loud. Its doing approach an excessive amount of and it takes away from what youve received to say --which I think is de facto important. I dont know when you didnt suppose that your words could hold everyones consideration, but you have been wrong. Anyway, in my language, there are not a lot good source like this.
April 25, 2011 at 1:47 AM