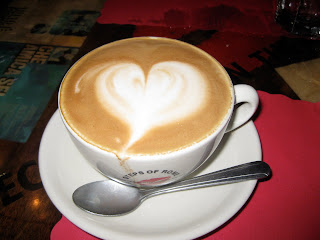 According to research published in the American Journal of Clinical Nutrition, habitual drinking of 3 cups/day or more of coffee is not associated with an increased risk for hypertension compared with less than 1 cup/day.  The study did a meta-analysis of six different trials that looked at a total of 172,567 participants.  They did find, however, a slight increase in hypertension in people who drank 1-3 cups compared to those who drank 0 or 1 cup/day.  There seemed to be no sex difference and there was no difference between smokers and non-smokers.

A couple of points should be noted.  They were unable to distinguish the effects of caffeinated and decaffeinated coffee, differences in serving size and brew strength.  We know that a cup of Sanka might be different than an espresso.  Also, all of the studies were performed in white populations.

While it is not the definitive answer, it does help  (white) coffee drinkers that drink over three cups a day know that it doesn't increase blood pressure.

r4 cards said…
Really great news for coffee lovers. Really thankful to you. I love coffee. This post would be motivate to drink coffee.
April 26, 2011 at 4:09 AM

Anonymous said…
Just in time for the Starbucks Trenta!

TrainersRoom said…
Hi, thanks for you article. I love coffee. Nice information for coffiee lovers!
Boxing/MMA Supplies
April 27, 2011 at 11:13 PM

paul said…
I believe that coffee has a lot of health benefits. It's also good in a diet. Thanks for sharing your insights.

people searches said…
This is really nice information during this blog. I am coffee drinker and I am very happy to read here. I like it very much.
May 6, 2011 at 12:53 AM

casino online said…
One cup of coffee is good for health. This blog is giving good news for coffee drinker.
June 1, 2011 at 8:20 PM

Dreambox HD said…
This blog is sharing the good information about the coffee lovers and This blog is nice and I am share this with my family and the friends .
August 19, 2011 at 2:44 AM

CafefitGourmetCoffee said…
Gano Brand Coffee At Wholesale Price. Gano Brand The Moxie Of Life! Where Our #1 Goal Is To Take Your Taste-Buds To The Next Level! And When We Do We Guarantee That You Will Never Go Back To Your Old Brew Again!

Converse Kids said…
Health is everything for person and People is must going take care of the healthy and People are always go for the some diet to remaining their body fit and clean
September 13, 2011 at 12:42 AM

Think about your future. Where will you and your family be in 5 years from right now? You may know where you want to be, but do you know how you are going to get there? Do you have a plan? Now more than ever it’s up to you to define your future. That’s where Organo Gold comes into the picture.

muebles en getafe said…
Thanks so much for this post, pretty worthwhile material.
October 6, 2011 at 10:04 PM

Health articles said…
Nice effort, very informative, this will help me to complete my task.
October 14, 2011 at 10:33 AM

Javier said…
Hello, I'm Javier. I own FDI/Youngevity. We sell health and wellness products and specialize in
providing organically derived minerals supplements. These don't come from rocks and soil. They are neither metallic
nor salts. These are called colloidal minerals. The organic or plant derived minerals come from humic
shale. What's that? Well, it's prehistoric plant life in its concentrated form. It was first discovered
on a Utah mountain-top and sold in 1926. It's plant derived minerals. That was 70 years ago, so we're
not talking about some brand new, unproven product. Colloidal minerals are still harvested on that
mountain today, from a 70-million-year-old humic shale deposit. The air was full of oxygen and nitrogen
back then, not like today. Some trees grew 25 feet A YEAR! Earth was a nutrient rich environment.
Animal life like the Brontosaurus ate lots of minerals back when it was in plant form. And you know how
big they got. Millions of years ago, Mother nature yielded a nutritional powerhouse. Prehistoric plan
life was packet with one of nature's most amazing nutrients... colloidal minerals are taken from plants
that have already assimilated inorganic minerals from rocks and soil. Through a process called
photosynthesis, the plants have converted these precious minerals into organic colloidals that are easily
absorbable by the human body. Colloidals are microscopic-sized electrically charged particles.
When absorbed by the body, colloidals act like a magnet, helping to pull broken-down cells into the
bloodstream to be eliminated. Meanwhile, the body is replenished with nourishing life-enriching minerals.
Plant derived minerals are clearly the BEST way to get your minerals. Youngevity offers the BEST plant
derived colloidal minerals in the world. Please take a look at our premium JavaFit Coffee product line which is a formulated
blend of 100% premium Arabica coffee from the finest regions of Latin America. Our experienced staff carefully chooses our freshly
roasted gourmet beans to create a delicious, full-bodied flavor. Many of our consistently rich,gourmet
coffees are packed with vitamins,minerals and supplements to get you through day without all the
chemicals and caffeine the traditional coffee makers use. The tastes of our unique blends are consistent
throughout our product line, making it easy to find the one that best suits the lifestyle of you and your
customers.

marketing online said…
Thank you for this post, really worthwhile info.
January 6, 2012 at 8:05 AM

Unknown said…
Hi to all the coffee drinkers out there ! why not switch over to a healthier coffee! This coffee is infused with Ganoderma Lucidum. Do a quick web search on Ganoderma Lucidum and you will see a whole list of benefits it has to offer!
Check out the website. It tastes good and it's good for you :)