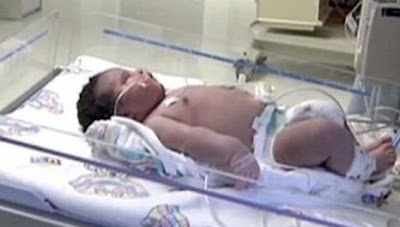 A woman in Texas gave birth to a baby boy who weighed in at a whopping 16lbs, 1oz.   The average size of a newborn is about 7 lbs so this one was considered huge.  This was the 4th child for the mom who had gestational diabetes during pregnancy.  Between 2 and 10% of pregnant women develop this condition.  Women who have a body mass index (BMI) over 30 or who have a strong family history of diabetes are most at risk.  Women who gain excessive weight during the first trimester are also at risk but most women have no risk factors.

One of the dangers of gestational diabetes is giving birth to a big baby.  The placenta produces hormones that spur growth of the baby and the baby gets more sugar than he needs.  Large babies are a problem because they usually need to be delivered by Caesarean section.  There is also increased risk of hypertension and preeclampsia.

The largest baby on record, according to the Guinness Book of World Records, was born in Canada in 1879.  That baby weighed 23 lbs, 12 oz but died 11 hours later.  Recently an Indonesian woman gave birth to a 19.2 lb infant.