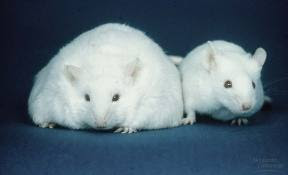 I usually choose not to write about the "new new scientific thing" that gets picked up by the press,  because early research is usually not reproducible and good science takes a long time to validate as true.  But since we know that mice and rats that are kept on low-calorie diets live 30% longer (and healthier) than their fat cohorts, I was interested in a new research compound, SRT-1720,  that was shown to protect obese mice from diseases of obesity.  Fat mice lived 44% longer if they were given this drug.

The "designer" drug works by chemically mimicking resveratrol which stimulates protective proteins called sirtuins.  These sirtuins regulate metabolism and are found with very low levels of calories.  Since most people cannot sustain a very low calorie diet indefinitely, nor can they drink 100 bottles of red wine a day to get resveratrol, SRT-1720 may lead to an answer to combat the obesity epidemic and the health problems that go with it.

Sirtris is the small pharmaceutical company that is studying SRT-1720.  They followed the chubby mice for three years and found SRT-1720 reduced the amount of fat in the liver and increased sensitivity to insulin.  Other drugs that are closely related to SRT-1720 are undergoing clinical trials in humans.

There should be much skepticism about this drug and others that promise longevity.  It is unlikely there will be a pill that will reverse poor eating habits or natural aging.  There have been hundreds (no thousands) of diet drugs and anti-aging drugs that have been developed and finally discarded when they do not work.  Even so, the diet business is a multi-billion dollar industry and big pharma will continue to try and develop a magic pill.

It is ironic that the more developed a country becomes, the more unhealthy the eating habits become.