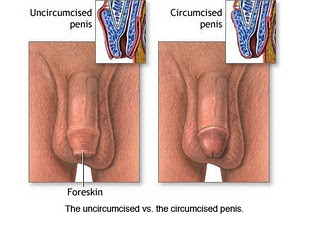 Male circumcision has been practiced for cultural and religious reasons since ancient times and it is estimated that about 1/4 of the world's men are circumcised.  It is a controversial topic and the debate about medical benefits of circumcision has not been fully resolved.   The Journal of the American Medical Association (JAMA) has recently published three randomized trials from Africa that demonstrated  adult male circumcision decreases HIV acquisition in men by 51-60%.   That is a huge decrease for a virus that is ravaging the continent.  Observational studies in the United States also show such declines in heterosexual circumcised men.

In addition to HIV, male circumcision has been shown to reduce other STDs.  Herpes and HVP contagion were reduced in men and the female partners of circumcised men had a lower risk of bacterial vaginosis and trichomoniasis.   Since STDs are a significant problem in the United States, there may be societal benefits for male circumcision.

Opponents of male circumcision have a strong and passionate voice against genital mutilation performed without the consent of an infant.  They say it is an unnecessary procedure that can affect sexual satisfaction and has its own risks.  Anecdotal reports about circumcision are strong on both sides of the argument.


It should be noted that there are NO HEALTH BENEFITS FOR FEMALE CIRCUMCISION OR GENITAL MUTILATION.  IT IS A DANGEROUS PROCEDURE FOR GIRLS AND SHOULD BE STOPPED.

The cultural reasons for male circumcision are long entrenched and there does not seem to be an outcry from adult men who were circumcised as infants and are resenting or regretting it.

The medical evidence for male circumcision is growing with these new studies that show both individual and public health benefit.   Parents should be provided with information derived from evidence-based medicine about the risks and benefits of male circumcision so they can make an informed choice for their children.

Anonymous said…
There's a big outcry from circumcised males in america, its just you butchers (doctors) are lieing to the American population for so long, not to mention the rest of the world, I hate how you doctors take statisics from Africa and try and apply it to America as if we are having the same problems. I believe all doctors should be held responsible for the damages you've done.
October 15, 2011 at 1:29 PM

How are doctors responsible for any 'damages'? It is not a doctor's choice to do this; now it's almost only because of religion that circumcision is performed.
Also, no one is trying to say we should just circumcise. She is stating a statistic. It's interesting. If North Americans would use protection and not be so irresponsible in their sexual affairs, then maybe we wouldn't have to be discussing this in the first place.
October 15, 2011 at 8:35 PM

Anonymous said…
"Female circumcision was linked to reduced risk of HIV infection in a study presented on international HIV conference in Rio."

Conclusions: A lowered risk of HIV infection among circumcised women was not attributable to confounding with another risk factor in these data. Anthropological insights on female circumcision as practiced in Tanzania may shed light on this conundrum.”

Also amputating girls’ labias would obviuosly completely eliminate the risk of vulvar cancer (and all other medical conditions) in the areas of the vulva that no longer exist. A missing body part cannot develop medical problems.
October 15, 2011 at 11:21 PM

Group of 137 women, affected by different types of female circumcision.
86% have orgasms
69.23% always have orgasms
91.23% of the younger women have orgasms
14 out of 15 infibulated report orgasms
Infibulated women showed the same desire, arousal, & satisfaction
No differences observed between circumcised and not regarding pain

Anonymous said…
From Manners of Welcoming the New Born Child

Toni Brayer, MD said…
To the one and same anon who is posting on female circumcision: I will be verifying all of your references. I am well read on this subject and these quotes and reports are not enough to be included in evidence based medicine. I am suspicious of your knowldge base.
October 16, 2011 at 7:33 AM

woodwoman said…
Interesting article. I can speak to this because I have two sons, both born abroad, where circumcision was not done.

However, one had continual problems and I finally took him to a urologist who immediately diagnosed his condition (don't remember the name) where there's a extra piece of skin attaching - one of the true medical reasons a circumcision is required so he had it done at that time. (A lot bigger operation than on an infant, but he was brave and went through it beautifully.)

We are glad we had it done and it solved the problems he was having. Having said that, I still think it's a procedure that requires more thought than people give it. The other son has never regretted that he isn't, though he has grown up in the US and all of his friends are. I think for both boys, it wasn't that big a deal. People really overrate that "looking like your friends" or "everyone in the family looking the same".
October 16, 2011 at 10:02 AM

woodwoman said…
I meant to add, the one who had to be circumcised eventually was about ten years old at the time.
October 16, 2011 at 10:03 AM

Anonymous said…
I agree that there are significant health benefits for male circumcision. However, they are mostly only relevant when the male is sexually active. Perhaps at that point, the decision should be made - and only with the consent of the male in question. I realise it is a more substantial operation but this must surely be better than parents making this irreversible decision to circumcise when the male is an infant.
October 16, 2011 at 11:22 AM

KM said…
One time when I worked for some Family Practice physicians in a multi-speciality clinic a 29-30 year old male came in who was married and a father of a baby wanting to get a doctor to do a circumcision for him. He was a bit worried about the pain but said he had been getting infections and wanted to reduce chance of getting more infections in the future, wanted to be healthier, and had discussed it with his wife.
October 16, 2011 at 11:55 AM

Hugh7 said…
Woodwoman, was the urologist in the USA? In the rest of the developed world, where doctors are taught more about the foreskin than how to cut it off, the lifetime risk of actually needing to be circumcised is very low indeed.
October 18, 2011 at 3:52 PM

woodwoman said…
Yes, the urologist is in southern California and an excellent one - basically there was an extra piece of skin involved and the foreskin was never, ever going to retract. Once he hit puberty, this was going to cause some serious pain. It was definitely needed, though a rare situation. I do believe most are unnecessary, but not this one.
October 19, 2011 at 9:09 AM

Toni Brayer, MD said…
Woodwoman and Hugh7: the condition is call phimosis and is not rare. It is indeed a medical indication for circumcision in a male.
October 19, 2011 at 9:43 AM

Hugh7 said…
@Tony Brayer: phimosis does not involve "an extra piece of skin" so it doesn't sound like what Woodswoman's son had. That sounds more like a secondary adhesion caused by forcibly retracting his skin prematurely. The AAP warns against doing that. It can be separated ("lysed") without circumcision, but some doctors just like to circumcise.

David MD said…
Dr. Brayer,
Thank you for the post but I would strongly recommend referring to the authority on the issue, the Centers for Disease Control and Prevention.

I would recommend reading the entire report. Here is a relevant excerpt suggesting the efficacy of male circumcision:

A large retrospective study of circumcision in nearly 15,000 infants found neonatal circumcision to be highly cost-effective, considering the estimated number of averted cases of infant urinary tract infection and lifetime incidence of HIV infection, penile cancer, balanoposthitis, and phimosis."
October 29, 2011 at 7:00 AM

Linda said…
Doctor Brayer is right, depite all the feelings about pros and cons, the evidence definitly supports male circumcision. I think as the public becomes more aware of the advantages,circumcision will be widely practiced.
February 17, 2013 at 6:44 AM

Anonymous said…
Why is this barbaric practice of genital mutilation referred to as "circumcision"?
January 26, 2016 at 9:40 PM