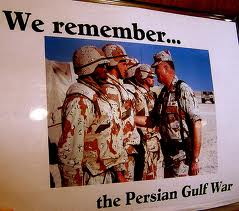 Remember the 1991 Gulf War between the United States and Iraq (aka: "Operation Desert Storm")?  A new study has been published in the American Journal of Epidemiology that assessed the health status of 5,469 deployed Gulf War veterans compared to 3,353 non deployed veterans.  At 10 year follow up, the deployed veterans were more likely to report persistent poor health.  The measures were functional impairment, limitation of activities, repeated clinic visits, recurrent hospitalization, perception of health as fair or poor, chronic fatigue syndrome illness and post-traumatic stress disorder.

From 1995 to 2005, the health of these veterans worsened in comparison to the veterans who did not deploy to the Persian Gulf.  A study done in the United Kingdom that compared Gulf War veterans to UN peacekeepers who served in Bosnia and other non-deployed Gulf War soldiers found the same thing.  The deployed veterans had significantly worse health in all realms.

This was a longitudinal study and the veterans self reported their health status.  Over time the deployed veterans reported new conditions that persisted or worsened with time.

The authors note that the health problems cannot be proven to be due to the effects of the military service in the Gulf War.  But previous studies also found a higher prevalence of PTSD and other mental disorders among deployed Gulf War soldiers.  This study also showed high rates of PSTD (14.4% compared to non-deployed, 4%).

There are numerous animal experiments that show exposure to repeated stress disrupts the blood-brain barrier and increases neurotoxicity induced by chemicals in many cerebral areas.  Gulf War soldiers were exposed to organosphosphate chemical warfare agents.  Even low level exposure to nerve agents can have a negative effect on brain structure years later.   In another study of Gulf War veterans, they found the soldiers with fatigue, mood or cognitive complaints demonstrated impaired immune function.

There is no doubt that our war veterans return home with significant health risks, even if they are not visibly wounded in battle.  These young men and women deserve not only our respect and praise, but the best mental and physical health care that we can provide.

Raymond Bouchayer said…
And using bullets that have depleted uranium ....not only American veteran's are getting sick , huge numbers of Iraqis are effected
This may also be a cause of illness
November 4, 2011 at 7:15 AM

hcg said…
Wow, nice post,there are many person searching about that now they will find enough resources by your post.Thank you for sharing to us.Please one more post about that..
November 5, 2011 at 1:49 AM

Ibitz said…
My father served in Desert Storm/Shield. He has Gulf War Syndrome- his hands and muscles and body parts shake so violently and there's no known cause so far. He has had tons of spinal surgeries due to his spine deteriorating and fusing, he has RA throughout his joints, easily broken body parts, vertigo, and now bronchitis. He is constantly working and yet feels like he can't move sometimes and he is only 44 years old.

As for myself, having been born during Desert Storm, my family and doctors have realized I'm one of thousands of kids affected during birth and after birth from birth defects. I was born having febrile seizures and grew up with vision, speech, hearing, nerve, and bone problems. My elbow completely deteriorated having barely hit it.
February 2, 2014 at 2:36 AM