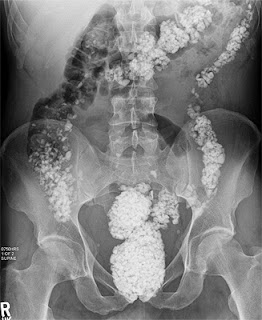 Pica is a medical term that refers to people who eat substances that are not nutritious like clay, dirt, paper or starch.  Lithophagia is the eating of rocks or pebbles.  The Xray above is from a 48 year old homeless man who came to the emergency department with abdominal pain, constipation and intermittent blood in his stool for 2 weeks.  The abdominal Xray showed small radio-opaque pebbles and gravel that the patient admitted eating over the last 9 months.  He believed that "God might turn it to bread in his belly."  He was given the diagnosis of nonspecific delusional disorder.

The patient underwent a purge with polyethelene glycol electrolyte solution.  (It is the same solution that is used for bowel prep before a colonoscopy).  Some of the pebbles had to be manually removed under general anesthesia.  His symptoms improved and follow-up Xray showed compete removal of the stones.  Unfortunately the patient was lost to follow-up after discharge from the hospital.

Geophagia is the eating of clay or dirt and it is not uncommon in the setting of famine and poverty.  There have only been 2 cases of lithophagia reported in the medical literature.

(Case from University of Wisconsin School of Medicine and Public Health, ConsultantLive)

Cary McNeal said…
I can't imagine what would make someone look at a pebble and say, "Mmm, those looks good. I think I will eat ten or twelve." On the bright side, dirt and rock eaters don't have to worry about iron deficiency.
December 20, 2011 at 5:39 AM

woodwoman said…
There is a tv show called "My Strange Addiction" which features a lot of these people. One woman ate a couch (over time). They've had eaters of chalk, clay pots, crayons, laundry detergent - fascinating.
December 20, 2011 at 6:54 AM

Affiliated Physicians said…
Can you imagine being the parent of a child with pica? It's scary enough to think that a small child might accidentally try to eat something they shouldn't but this disease actually makes them seek it out!
December 21, 2011 at 12:11 PM

Physiotherapy Dublin said…
Avoid these inferior product. These are harmful for your health.
December 27, 2011 at 5:22 AM

Anonymous said…
Ugh i have this i think i have iron defiency anemia i asked my doctor to check for it but he said i didnt need it probably cuz im fat i like to eat rocks dirt chalk paper ice and ive had lead poisoning before i wish i didnt have this but watcha gunna do bout it
August 23, 2015 at 3:21 PM