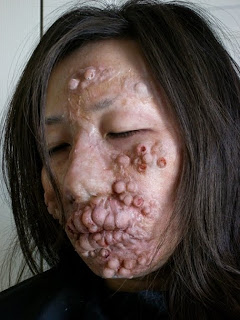 The answer to yesterday's diagnostic challenge is #2.  Leprosy.

Most of you were correct.  The patient's face had multiple nodular lesions that coalesced into plaques.  After 9 months of multidrug treatment the skin infiltration and weakness in the left eyelid had diminished.

Leprosy is caused by the bacterium, Mycobacterium leprae.  It is not very contagious and has a long incubation period before symptoms begin.  The lepromatous type causes large bumps and lumps and is the most severe.

Effective medications exist to treat leprosy, which is also known as Hansen's disease.  Usually different antibiotics are used together.   It is important to diagnose the disease early so treatment can limit damage and disfigurement.