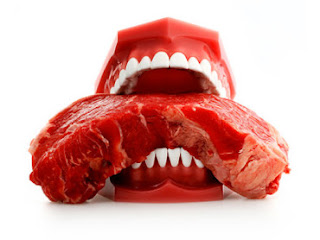 Advanced warning: meat lovers are not going to like this.

A well done study published in the Archives of Internal Medicine as shown that red meat consumption is linked with an increased risk of total death, cardiovascular death and cancer death.  Yup...death!  That goes further than what we knew before about red meat connection to heart attacks and strokes.  This is the big one.


This study looked at two large studies that contained 28 years of follow-up data:  The Health Professionals Follow-up Study and the Nurses' Health Study.   The researchers excluded subjects that had a history of CVD or cancer at baseline or left more than 9 study questions blank.  They ended up with 37,698 men and 83,644 women.

They found some interesting things.  Both men and women with higher intake of red meat were less likely to be physically active and were more likely to be smokers, drink alcohol and have a higher body mass index (fat!).   Additionally, those with higher intake of meat had lower intakes of whole grains, fruits and vegetables.  Over time,  (from 1986 to 2006) the daily intake of red meat dropped.  (perhaps this was the result of public service education about the cardiovascular dangers of red meat that occurred during that time period)

This was a strong study.  Because all of the participants were professionals, their education was similar.  The study size was huge as were the years of follow-up.  But the researchers could not differentiate between "lean" meat and higher fat content meat.  They did find that bacon and hot dogs had higher risk than other types.  They found that processed meats that contain sodium and nitrates increased cardiovascular disease, cancer and death.

Here is the bottom line.  Eating meat is bad for the planet and bad for your body. If you can't become a vegetarian do yourself a favor and reduce your red meat intake to a few ounces a day.  Have meatless days where you substitute fish or plant based meals.  Replacement of meat with alternative healthy dietary components will lower your mortality risk.

Bridget said…
Thank you for this information. I stopped eating meat when I was old enough to make that decision for myself. My decision was based on inhumane treatment of animals.

The planet needs to evolve beyond eating meat which is a bad thing no matter how you look at it. The planet says so, science says so, your body says so. Cruel acts have cruel consequences.
April 17, 2012 at 6:08 AM

Chef Scotty said…
Thank you Doc. The food processing system that we have set up in order to feed over 7 billion people on this planet has proven itself to be effective but dangerous to our health. Wisdom dictates that we eat fresh, eat local or regional, and eat natural. It would seem that live/ pecticide free foods, natural meats, low/no salt and sugar intake is a good rule of thumb. The frozen 'Take-n-Bake' products we manufacture and deliver via my company, Lasagna and More, meet such requirements...and the public loves them. We can keep our capital loving system in tact and still live well, with a few conscious decisions
April 17, 2012 at 8:47 AM

Anonymous said…
Very interesting. I find this info compelling I'm wondering some things. Study said it examined professionals, large study over long time period, all very good. I'm wondering, though, if the group started to substitute other foods that were more nutritious, as well as cut back on red meat. While studies like this are compelling, you really need to know this additional data. Like the oat bran study, that showed that there was a modestly good effect from consuming oat bran, but it was also a marker for a better diet in the study sample. Food for thought!
April 17, 2012 at 1:02 PM

sarah said…
i must paste one statistic more that i found