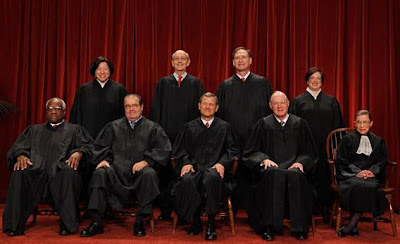 The Nation is anxiously awaiting the ruling of the Supreme Court on the Health Reform Act (Accountable Care Act..aka: Obamacare) which will be announced in June.  The 6 days of hearings were unprecedented in their partisan tone and we got a good idea of how the justices will vote.  But no-one can truly predict how it will turn out until the last minute.  Each one has already rendered a private decision and the next two months will be for counterarguments and more deliberation before the final decision.

The justices can overturn the entire law, which would nullify many important health provisions that have already taken effect.  For example, 2.5 million young adults under the age of 26 could lose insurance coverage through their parents' plans.  Patient safety improvements that are already in effect would be reversed.  Preventive care goes away and  value based purchasing has just begun under ACA and could be reversed if the act is struck down.

The justices could strike down the individual mandate part of the law.  After all, we are a free country and no-one should be forced to buy health insurance, right?  Never mind that everyone is forced into Social Security and Medicare through payroll taxes and car insurance is mandated if you drive.  Millions of people pay into Medicare and never use the service if they die before age 65 or are Christian Scientists or just hate doctors.  No-one gets a rebate.  Never mind that Emergency rooms and physicians are REQUIRED by law to treat uninsured people in the emergency room.  No-one seems to mind about that mandate!

If they strike the mandate, they also nullify the provision for community rating and guaranteed insurance.  There is no ACA without the mandate...something the GOP knows.  Mitt Romney and Newt Gingrich were fervent supporters of the mandate before they ran for President. If the mandate is eliminated,  it's back to the status quo.

The Republicans would like to make Medicare into a voucher program.  That shifts the buck back to people who can least afford it and guarantees higher administrative costs.  It essentially dismantles Medicare.

The Accountable Care Act is simply a start.  It doesn't go far enough to reduce spiraling costs.  It does address inequalities of care and helps reign in abuses.  It is a start at shifting from "do more, despite the outcome", to focusing on value.

I support it and hope the Supreme Court does too.

Bruce said…
As a licensed Independent Insurance Agent in AZ I hear so many stories of how this is going to pan out. The insurance companies are scrambling to make ends meet by making all sorts of changes; coverages, pricing, rules and regs for example. A lot of very good smaller health insurance companies have had to close their doors leaving policyholders scrambling to find coverage with another company, usually at higher costs with less covered care. That leaves the giant companies to dictate costs and it looks more and more like a monopoly at times. I hope they get it right where it's a fair deal for everyone involved; providers, insureds and caregivers.
April 4, 2012 at 6:51 AM

Raymond Bouchayer said…
Grim looking bunch of people ...What is the problem with Medicaire for all( paid by our taxes and increse taxes on cigarettes and alcohol) , eliminate the Insurance Companies, the real thieves .
I guess not , Lobbiest are too busy paying off Politicians to vote for the profits of Insurance Companies
April 4, 2012 at 6:52 AM

Steve Heilig said…
"The justices considered whether to invalidate the entire law... 'You really want us to go through these 2,700 pages?' asked Justice Antonin Scalia."
- Well, yes, Your Honor, that would seem appropriate, considering.
April 5, 2012 at 11:20 AM

Yan Katsnelson said…
Hi, cool post. I have been thinking about this topic,so thanks for sharing. I will probably be subscribing to your blog. Keep up great writing!!!