Obama vs. Ryan at AARP 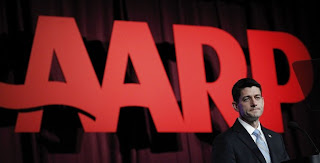 President Obama and Vice-pres nominee Paul Ryan went head to head at the recent AARP convention in New Orleans and addressed the group on Medicare and the Accountable Care Act (aka: Obamacare).  Their appearances were back to back.

Ryan told the audience,"The first step toward a stronger Medicare is to repeal "ObamaCare" because it represents the worst of both worlds".  He argued that the federal health reform law would "funnel $716 billion out of Medicare to pay for a new entitlement we didn't even ask for."  He also said that Romney's plan to transition Medicare into a premium support program "empowers future seniors to choose the coverage the works best for them" and is "designed to guarantee that seniors can always afford Medicare coverage."

The response from the group was lackluster with little applause and many boos during his speech, according to the Washington Post.

It was no surprise that Obama, who addressed the convention via satellite, defended Obamacare and told the crowd that the GOP plan would leave them "at the mercy of insurance companies."  He also addressed Ryan's remarks that $716 billion was cut to fund ACA and said, "It's simply not true.   Those savings are part of what allows us to close the doughnut hole, provide the preventive care, and is actually going to extend the life of Medicare over the long term."

AARP is a nonpartisan organization that is the nation's largest and most powerful senior's lobby.  AARP has supported the Affordable Care Act.

Michael Kirsch, M.D. said…
Nice post. I think that the GOP have been more upfront with the American people than the Dems have been with regard to Medicare. Not many choices here. Raise retirement age, pay more into the system and/or cut benefits. I haven't regarded the AARP as non-partisan, although they may be technically classified this way. It's going to be interesting...
October 1, 2012 at 9:37 AM

Toni Brayer, MD said…
Thanks Michael Kirsch: Neither of the parties is telling the truth about Medicare. All I know is people look forward to turning 65 so they can get it so somehow it is a crowd pleaser.
October 2, 2012 at 8:01 AM