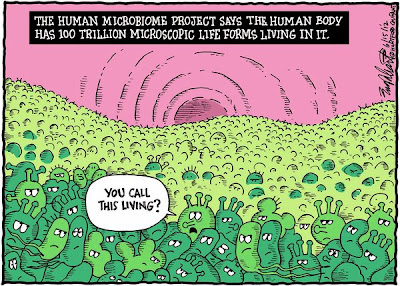 I am fascinated by the new research and information on the gut microbiome.  These microorganisms (germs, bacteria, microbes) live harmoniously in every part of our body and especially in our gastrointestinal system.  It wasn't even really discovered until the late 1990s and we now know that these microbial communities affect our health in ways we never dreamed.  The human microbiome may play a role in obesity, immune response, diabetes, irritable bowel syndrome, and maybe even anxiety, depression and autism.

Anything that is this new has many possibilities the science is just starting, but there is clearly something very important here.   The Human Microbiome Project  is a NIH initiative with the goal of identifying and characterizing the microorganisms which are found in association with both healthy and diseased humans.  They intend to test how changes in the human microbiome are associated with human health or disease.

A new study published in Nature this week showed that adaptation to the gut microbiome can change in a day.  This is important because dietary changes can have a huge immediate effect on disease.  The researchers showed how immediate changes occur, depending upon subjects eating a plant based or animal based diet.  They fed the volunteers either plant (grains, legumes, fruits and vegies) or animal (meats, cheese, eggs) diets for 5 consecutive days.  They tracked food in the digestive tract, how the subjects felt and bowel movements.

The researchers found fecal bile acid changes in the animal based diet that are associated with liver cancer and Irritable bowel disease. These bile acids change the bile tolerant bacterium that is associated with IBD. 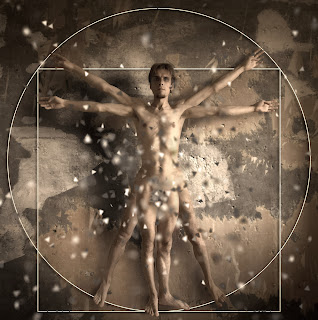 There is no cause-effect found here and the study size was too small to know what is actually occurring.  But the fact that changes could be found in the gut microbiome in such a short amount of time is compelling.  It is simply another potential explanation why diet is so important to health.  And changing our diet can have an immediate effect on our health.

Your blog is very interesting! I learned a lot from it. Thank you so much and for sure I will really share this to my friends.
December 29, 2013 at 8:12 PM

Anonymous said…
I got this web page from my pal who informed me on the topic of this website
and at the moment this time I am visiting this web site and reading very informative articles or reviews here.