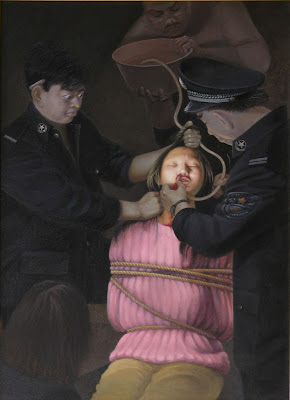 Hundreds of prisoners at Guantanamo Bay, Cuba have gone on hunger strikes to protest their indefinite detention without legal process and inhumane treatment. When this happens, 6-point restraints have been and are still being used to immobilize prisoners and nasogastric tubes are inserted for force feedings.

Force feeding of competent prisoners who have refused food is a violation of the Geneva Conventions, International human rights law and medical ethics. The World Medical Association has recently updated the Declaration of Malta with guidelines on care of hunger strikers. They have stated that if the hunger striker is not being coerced, either by other prisoners, officials or outside influences, forcing treatment on competent people is wrong.

"Forced feeding contrary to an informed and voluntary refusal is unjustified...Forcible feeding is never ethically acceptable. Even if intended to benefit, feeding accompanied by threats, coercion, force or use of physical restraints is a form of inhuman and degrading treatment."

The International Tribunal for the former Yugoslavia ruled in 2006 that force feeding of a prisoner in handcuffs with a rubber tube "constituted treatment of such a severe character warranting the characterization of torture".

A Physician's duty to the patient is always the highest priority. Because all ethical rules for treating hunger strikers require the cooperation of physicians, physicians should prevent the force-feeding of competent prisoners by refusing to approve or participate in these activities.

Raymond Bouchayer said…
Thank you Dr. Toni for bringing this up .. Coming from you, a very well known and respected physician this matter will be looked out with more attention and maybe some of our very deranged government official will change their ways and remember that we have executed Japanese and Germans for the same tactics.....what is good for the goose is good for the gander.
December 9, 2007 at 10:31 AM

Anonymous said…
It is so sad that the USA has lost its moral fiber and has sunk to such depths as to sanction torture. We will be judged harshly in history for this administration. Physicians who follow orders at Guantanamo are no better than the Nazi doctors who followed orders.
December 11, 2007 at 10:16 PM

Anonymous said…
As a returning soldier who worked at Git, I found your blog offensive, misleading, and arrogant. Do your research and talk to the TROOPS on the ground at Git, and Iraq for that matter, and you are sure to get a much different, positive, less cynical story. These individuals are war criminals, they hate us, and will do anything to kill you and I-they expressed this to me daily, as my last prisoner so eloquently expressed to me, "Allah willing, we will bring fire to destroy your children..." WE are not the enemy...THEY are. People like you need to understand this, as your frame of reference has been completely skewed. Our troops are the best in the world, we are proud of our mission, and serve honorably everyday.
December 12, 2007 at 3:41 AM

Toni Brayer, MD said…
Sargent mike: Thank you for your service and dedication. There was nothing in the blog that denigrated our troops. All prisoners of war are the "enemy" but there are global standards that have been adopted for these prisoners. As the blog stated, the national medical community has also created standards of practice and Git is not immune from them.

If my blog was wrong and force feeding is not occurring, I would like to know. The facts stated regarding humane treatment of prisoners and a physicians duty remain.

To understand the mind of terrorists and the hatred that exists in the world today, I recommend the Pulitzer prize winner of 2007 "The Looming Tower - Al-Qaeda and the road to 9/11" by Lawrence Wright.
December 12, 2007 at 7:04 AM

Anonymous said…
"sargent mike" is pretty obviously a troll. I would have just deleted his comment rather than dignify it by replying to it.

"as my last prisoner so eloquently expressed to me, "Allah willing, we will bring fire to destroy your children...""

Anonymous said…
"Our troops are the best in the world"...

Everything that is wrong with America summed up in one sentence.


And Sargent Mike, I'm glad you're torturing and killing people who have offended America, the greatest country on Earth. How dare they stand up for their religion and morals when they are different to yours.

Anonymous said…
I just reread this blog and thought it is a very well explained and written article backed up carefuly, in a strong, calm way with documented laws, agreements, and oaths pertaining t teh physicians role.