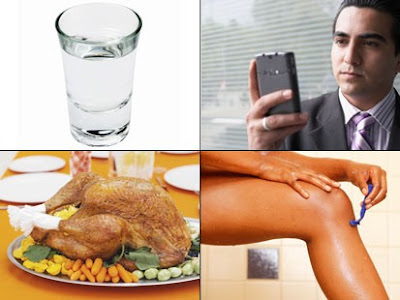 I love the British Medical Journal because it is filled with wit and just good interesting stuff. Those Brits know how to keep it real! The December issue addressed medical myths that we've all heard for so long that everyone believes they are true. They chose seven to research and found no evidence to support them:

1. People should drink 8 glasses of water a day. They found that most people get water in their food and usual beverages and there was no evidence to force drinking 8 glasses.

2. We only use 10% of our brains. I found myself repeating this to my son just the other day. Metabolic studies that track differential rates of cellular metabolism within the brain show no dormant areas.

3. Hair and fingernails continue to grow after death. I think "CSI" on TV already dispelled this myth. It is dehydration and shrinking of the skin that makes it appear to grow.

4. Shaving hair makes it grow back faster, darker, coarser. It sure seems that way to me but, in fact, it is only the cutting of the fine tapered ends of hair that makes it seem coarser. Guess that stubble is just normal growth.

5. Reading in dim light ruins your eyesight. Hundreds of expert opinions conclude that reading in low light does no permanent damage. In the past they read exclusively by candle light and there was no increase myopia.

6. Eating turkey causes drowsiness. Although turkey does contain tryptophan, other proteins such as pork or cheese contain more tryptophan than turkey. It is probably the wine and other large side dishes of holiday meals that contribute to post meal drowsiness.

7. Mobile phones create electromagnetic interference in hospitals. Despite warnings by the press and even the Wall Street Journal in 1993, the British researchers could find no evidence for this myth. In 2005 the Mayo Clinic and various European researchers tested mobile phones and found no interference.

Anonymous said…
How about cracking your knuckles or joints will give you arthritis. Is that one true?
February 3, 2008 at 11:30 AM

Anonymous said…
I'm glad about the reading light and the water. Drinking those 8 glasses was never easy and who needs to feel guilty about that!! Thanks for the info.
February 3, 2008 at 3:12 PM

Anonymous said…
This comment has been removed by a blog administrator.
February 4, 2008 at 8:39 PM

Anonymous said…
what about Acute hyponatremia that occurs within 48 hours of drinking 8, 8 ounce glasses of water?
February 4, 2008 at 8:55 PM

Neha said…
Turkey was always my excuse for falling asleep as soon as I stuffed myself with the last morsel of pie - whoops! there goes that excuse :-) Great list!
February 5, 2008 at 4:50 AM