Circumcision and STD - the jury is out 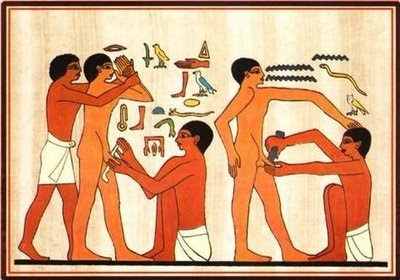 The evidence and medical research to support or refute circumcision in boys has not changed in the last 40 years! If you google "circumcision and STD" you will get thousands of search results and no clear science.

In 2006 a major study out of New Zealand showed circumcised men had less incidence of contracting sexually transmitted diseases than non-cut men. Score one for circumcision! Now a new study from New Zealand has been published in The Journal of Pediatrics showing there is no difference in the incidence of catching a STD. (What's with New Zealand? Is this their contribution to the world's medical knowledge?).

"To circumcise or not" is an decision faced by most new parents and it is important to know that there isn't good scientific evidence to guide them. It is a personal, religious, cultural, emotional, irrational decision...not a scientific one.

Anonymous said…
I knew of a patient that had a circumcism done as a young adult married and had a baby.
The reason he said he wanted it was because of getting too many infections.
June 6, 2008 at 12:17 PM

Jonathan said…
I’m amazed at the breadth of topics you’re covering, which just keep getting wider, and your reportorial voice, which keeps getting more refined.
June 6, 2008 at 12:47 PM

tracey said…
I'm with Jonothan - I love the wide ranging topics you cover. I don't always agree with you, but you always make me think, and the topics are always interesting. We live on opposite coasts - my field is religion, yours in science, but we share a lot of common ground. Thanks for blogging!
June 7, 2008 at 12:16 PM

Anonymous said…
Look, I'm uncircumcised and healthy. I haven't had any infections or STDs. I think some "uncut" men do not clean their penises properly and that could lead to a lot of risks for infection and STDs.

It's simple, keep it clean and wear protection. I'm tired of some people looking down on uncircumcised men as filthy disease carriers.
June 14, 2008 at 10:32 PM

Anonymous said…
I'm cut because my parents made that decision for me. I asked my Dad why he chose to have me cut. He said because it's much cleaner. I disagree. My boyfriend is uncut and he's always clean and has never had an infection. Although I'm very envious of his uncut penis, at least I'm lucky enough to share and enjoy his.
June 15, 2008 at 8:58 PM

Anonymous said…
My brother is circumcised and I'm not, and he has almost no sensitivity in his penis compared to mine. My uncut penis is very sensitive and very soft like the skin on my lips, his is very dry, calloused and he has stated that he gets no real sensation on it. I think we need, and are supposed to keep our foreskin's. He hates the fact that he was cut.
June 15, 2008 at 10:34 PM

Anonymous said…
OMG!
i guess its not only me who had the observation of my dick being less sensitive after the cut. its a religious thing. and i regret it a lot.
June 16, 2008 at 3:34 PM

Anonymous said…
i think anything thats against nature may b bad i mean y on earth were boys born with foreskin ,if that really wasnt necessary and as far as keeping once genitals clean goes it a personal habit!!
i personally think circumsition is quite dangerous thing it requires a great precision evn then bad can happen ,, ppl just propogatinf it for religions sounds insanee
July 22, 2009 at 10:54 PM

wine production said…
I think circumcision is very important ... if men showed that circumcised men were less likely to contract a sexually transmitted disease then do not see why not do it to our children ... thanks
aroicsz
June 21, 2010 at 8:06 PM

soft cialis said…
The circumcision is a very crontroversial truth and my thinking on this is very open ... if it keeps us afflicted with diseases such as HIV is extremely important to do it to our children ... thanks
June 21, 2010 at 8:17 PM

Firesales Costa Rica said…
Hello.. Firstly I would like to send greetings to all readers. After this, I recognize the content so interesting about this article. For me personally I liked all the information. I would like to know of cases like this more often. In my personal experience I might mention a book called Firesales Costa Rica in this book that I mentioned have very interesting topics, and also you have much to do with the main theme of this article.
September 24, 2010 at 11:47 AM

viagra online said…
it is an excellent practices because the prepuce hold a lot of bacterias. So it is good for the men and women.
April 6, 2011 at 9:13 AM

escorts madrid said…
Thank you for your article, quite effective information.
September 2, 2011 at 11:34 PM

Yorgis Ali Toufexis said…
I would not argue against an adult's decision to have oneself circumcised.
However, when performed on a baby, circumcision is genital mutilation without consent, period. Circumcision of older boys and teenagers is a more complex issue. Is there such a thing as informed consent when the boy lives in a cultural milieu where he would be excluded unless circumcised?
September 29, 2011 at 7:37 AM

www.natalia.biz said…
Quite worthwhile piece of writing, lots of thanks for the article.
October 18, 2011 at 8:32 AM