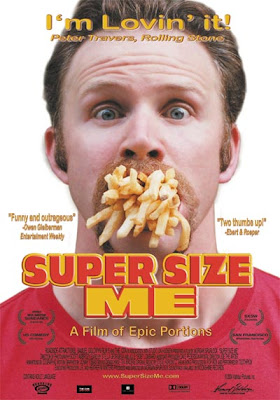 Los Angeles has taken a bold move in the battle against unhealthy eating by banning new fast food restaurants from opening in some of the city's poorest neighborhoods. The city council has issued a moratorium on new fast food for a year in South Los Angeles.

Sure there is criticism..government stepping into a free market...government treating people like children that can't make good decisions for themselves...government targeting poor neighborhoods, etc etc.

But more than 45% of the 900 restaurants are fast food chains in the affected 32-square-mile zone. There is do doubt that fast food chains (McDonalds, Wendys, KFC, Burger King) squeeze out competition. Most poor neighborhoods don't have large supermarkets with organic food or appealing vegi displays. The choices for people in poor urban neighborhoods are limited so let's face it...unchecked market forces are leading this country toward obesity, diabetes and heart disease.

Ask any mom (poor or rich) if she wants fast food restaurants on every block and the answer will be "no". How about a convenient supermarket with appealing fresh food or deli? You won't easily find that in South LA.

I don't think this is heavy handed government. Prudent urban planning is the responsibility of government and LA got it right.

Anonymous said…
I think the Fast Food moratorium is a smart and great idea! Places in the South and Mid West where it is harder to find healthy food should use them as a model to follow.
Kellie
August 13, 2008 at 9:51 AM

Anonymous said…
LA has taken a very important step. It is obvious that liquor stores, lottery and fast food are mainly found in poor neighborhoods. It perpetuates the poor health habits and disrespect of the community.
August 14, 2008 at 12:49 AM

Anonymous said…
Glad to see government stepping in when they should for a change for the betterment of the people. Usually it is not that way. The next step would be to help subsidize those healthy corner markets you mention to enable less fortunate families the ability to buy high quality produce etc. Wonder if that would happen?
August 14, 2008 at 7:08 PM

ERP said…
I agree that it is a good idea. The sad thing is that many people have to be saved from themselves (after all they are under influence from much larger forces.. ie fast food industry). I did like the comment however that one fast food chain executive said "will it come where someone says "sorry you are too fat to have a hamburger" when you enter McDonald's?" We clearly don't want peoples right to eat what they want (healthy or not) to be infringed on - smacks of something China would do....
And by the way, High Fructose Corn Syrup is the antichrist! I cut it out of my diet 4 years ago and immediately lost 10 pounds which has stayed off. And I did absolutely nothing else! Just cut out that liquid Insulin-inducer!
August 15, 2008 at 2:27 PM

Neponset River Bridge Dig said…
not to mention the all the stores that sell booze on every corner as well. So if you want to get drunk and become obese, it's easy to do in the poorer neighborhoods.
August 15, 2008 at 6:35 PM

Invertir en oro said…
I think it's important that we all know a little about this subject so interesting, I think it's part of human culture tell us about such things.
Invertir en petroleo
April 14, 2011 at 1:32 PM