Medical Quiz - Do You Know? 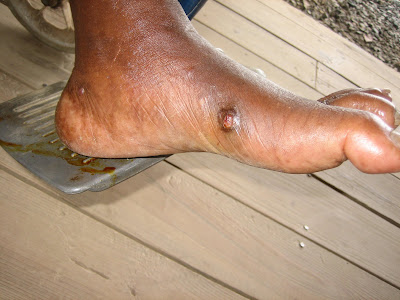 This is a real Quiz and I don't have the answer.

This is a photo I took in Honduras of a woman's foot. It is resting on a wheelchair as she previously underwent a BKA (below the knee) amputation for complications of diabetes. She now had this strange, slightly ulcerated, non tender lesion on her foot for several months. You can see a smaller, less ulcerated lesion on her heel area.

I could not make a diagnosis without a biopsy. It did not appear infected, but certainly it could have been atypical TB. I also thought of necrobiosis lipoidica diabeticorum but it did not have the shiny typical features.

In Roatan there is no dermatologist nor did I have the means to do a biopsy with pathology. My final diagnosis was a pyogenic granuloma. Any ideas from you diagnosticians out there?

Unknown said…
It could be - as it looks like a pyogenic granuloma. With the pyogenic granulomas they come on really quickly and get very large, over the course of weeks to months. Every time I see a lesion that looks like that, and the history reveals such a rapid growth that I feel like I have to get the person into a Derm within a week, it is usually a PG - and I relax a bit! What did you do?
August 19, 2008 at 6:15 PM

Anonymous said…
You probably already thought of these and ruled them out.
Do you think it could have been from a Brown Recluse Spider bite? Or MRSA?
Thought about Lymes from a tic bite but didn't think it looked like it.
KM
August 19, 2008 at 9:53 PM

Anonymous said…
Your differential is sound. I think I agree with pyogenic granuloma too.
August 20, 2008 at 7:00 AM

Anonymous said…
What is the treatment for your diagnosis that you gave your patient?
August 20, 2008 at 8:31 AM

Toni Brayer, MD said…
jason: It was Honduras. I gave her a topical antibiotic and told her to return to the clinic if it changed, grew, got red or started hurting.

Raymond Bouchayer said…
About Coral ...you know Roatan has lots of that and you get infection from that.
August 21, 2008 at 9:51 PM

Anonymous said…
pyogenic granuloma, this is what my daughters primary care doc said but she did not give her any antibiotics they said to go to the dermatologist but they are scheduling for a month as they have no sooner appointments.Should i just take her to the ER it is very frigntening looking and she has been swimming and it has a weird odor to it.
June 6, 2010 at 12:26 PM