Obama and the Dems have done a terrible job at marketing Health Care Reform, also known as the Patient Protection and Affordable Care Act.  The statute that is now law has new provisions that go into effect as early as September 23, 2010 and millions of people will benefit.  Here are a few benefits that you probably haven't heard much about: 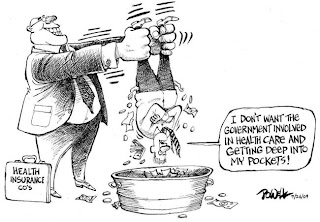 All I seem to read about are States and Insurance Conglomerates suing the government in an attempt to overturn the Patient Protection and Affordable Care Act.  In the meantime, the new law might just be doing some good.

KM said…
I hope this does help alot of people. For me my insurance can still raise it's premiums every year across the board for no reason and not cover any preventative doctor visits like a physical, or annual gyn. or flu shots.
It seems like if a person has never smoked there should be some kind of smaller discount factored in to the monthly charge as well as if you maintain a healthy weight, eat healthy and drink in moderation, as incentives for living a healthy lifestyle.
September 23, 2010 at 7:44 AM

sunnydalai said…
Very well said again, Doc. I would only add that the media in general, and specifically the evening news etc., have done a terrible job of following up and showing their audience what has changed and how. This HAS to be part of their job. Not sexy, not bloody, but so vital to many.
September 23, 2010 at 8:28 AM

BrainDame said…
You have done great job of framing many positive attributes of the legislation-I hope many are listening!
September 23, 2010 at 9:30 AM

Michael Kirsch, M.D. said…
Many of the proposals that you outline are laudable. Who can argue against their objectives? My concern is how are we going to pay for it all? The bill hasn't come in yet, and will surely be higher than current estimates. Everyone seems to want some other constituency to give up something? Physicians will be asked to earn less. Patients will be asked to pay more and receive less. Drug companies will be taxed more and regulated more. So, it don't think it will be all that rosy. I think that the anticipated GOP success this November will be attributed in large measure to rising public dissatisfaction with the health care plan. This subject is so important, and I'm glad you posted on it.
September 24, 2010 at 1:50 PM

translation services said…
They said :No insurance plans from imposing lifetime limits on health insurance or catastrophic events. It is huge and should give us comfort that we will not fall if we get sick.
September 25, 2010 at 3:20 AM

Golf fitness said…
Health is Wealth. If you have a good health then definitely you can have a very good life. Health is easy to maintain if you take the right steps.
January 10, 2011 at 3:27 PM

linkwheel said…
I was questioning what is up with that bizarre gravatar??? I know 5am is early and I'm not wanting my finest at that hour, however I hope I do not seem like this! I'd nonetheless make that face if I am requested to do a hundred pushups. lol Anyway, in my language, there should not much good source like this.
March 30, 2011 at 9:20 PM

link wheel said…
Please inform me it labored proper? I dont wish to sumit it again if i would not have to! Either the blog glitced out or i'm an idiot, the second option doesnt shock me lol. thanks for an ideal blog! Anyway, in my language, there are not much good source like this.
March 30, 2011 at 11:42 PM

so dep said…
Have you ever ever thought about adding a little bit extra than just your ideas? I imply, what you say is important and everything. However its bought no punch, no pop! Perhaps if you added a pic or two, a video? You could have such a extra highly effective weblog in case you let individuals SEE what youre talking about as a substitute of simply reading it. Anyway, in my language, there usually are not a lot good source like this.
March 31, 2011 at 7:28 PM

Antarctica Cruises 2012 said…
It is an informative post. It is an interesting information. I always visited your blog site. There are so many meaningful posts and also relevant comments on it.
September 20, 2011 at 10:55 PM

NCH Australia said…
Health is wealth. If you have good health, then surely you can have a very good life. Health is easy to maintain if you take the right steps.
October 3, 2011 at 7:23 AM

designer swimwear said…
They said: No limit to impose a life insurance health insurance or disaster. And 'huge and should give us comfort that will not fall if we get sick.
October 5, 2011 at 5:50 PM

Spider Solitaire said…
The Patient Protection and Affordable Care Act is really good for the public. It is true that many young people dependent on their parents insurance because of they have not their own insurance.
October 31, 2011 at 9:18 PM

designer swimsuits said…
Please inform me that he worked for? Sumit do not want him back if he could not do it! Whether in or out glitced blog I'm an idiot, the second option does not shock me lol. thanks for a great blog! Anyway, in my language, there are not many good sources that way.
November 12, 2011 at 1:30 PM

hotels in miami beach said…
They said :No insurance plans from imposing lifetime limits on health insurance or catastrophic events. It is huge and should give us comfort that we will not fall if we get sick.
November 17, 2011 at 1:55 PM

chiropractic advertising said…
It is an informative post. Obama government work more on it. They done a great job. We know that insurance is so necessary for everyone at the time of unexpected moment of life.
November 19, 2011 at 1:58 AM

Unknown said…
This is amazing information for insurance .My suggestion on this topic is every person necessary to its life insurance for bright future.

find song by lyrics said…
It is a useful post for us. It is important for all countries government to keep healthy their country. We know that with the good health people can live a healthy life.
December 8, 2011 at 9:41 PM

master grande école said…
We know that health is wealth. It is the important issue for all governments. So many countries really takes good action against health issue.
December 18, 2011 at 8:43 PM

sim dep said…
Hey cool weblog, simply wondering what anti-spam software program you use for comments because i get lots on my blog. Anyway, in my language, there should not a lot good supply like this.
December 26, 2011 at 1:37 AM

sim số đẹp said…
Hello, I saw a three of your attention-grabbing posted posts and needed to ask in the event you would be interested in reciprocal pages? Crew have weblog about alexis texas ass! Anyway, in my language, there usually are not much good supply like this.
January 2, 2012 at 11:27 PM

Sim 10 so said…
Wonderful learn, I simply handed this onto a colleague who was doing some research on that. And he actually purchased me lunch because I discovered it for him smile So let me rephrase that: Thanks for lunch! Anyway, in my language, there should not much good source like this.
January 11, 2012 at 7:23 AM

Sim viettel said…
Your weblog is fine. I just wish to comment on the design. Its too loud. Its doing way an excessive amount of and it takes away from what you received to say --which I feel is basically important. I dont know if you happen to didnt suppose that your phrases could maintain everyone attention, however you had been wrong. Anyway, in my language, there aren't a lot good source like this.
February 3, 2012 at 4:21 AM