Last month an elderly man in Massachusetts developed a collapsed lung and pneumonia. Usually this means an undiagnosed cancer is lurking.  Imagine his relief and surprise to find out it was a pea growing in his lung.  That little accidentally inhaled pea started sprouting.  It seems that odd things found in lungs is not all that rare.  The trachea and the esophagus are really side by side and it is easy to "aspirate" and have food, liquid or objects head into the trachea and then to the bronchus, where it should not be.

What other things have been found in the bronchi and lungs?  One surgeon found a belly button ring.  Fishbones as well as nuts, beans, little candies or food particles are easily inhaled into the bronchial tubes.   Balloons are common as are hot dogs and even small toys.  Even partial dentures are found and many times the elderly person didn't know where they lost it.

Children are especially susceptible to foreign body aspiration. 90% of all incidents happen in children under age 4. Small lithium "button" batteries are dangerous for children and are often swallowed.  The national Capital Poison Control Center even has a special 24-hour hotline for battery ingestion cases at 202-625-3333.  Swallowing one of these batteries is a medical emergency. 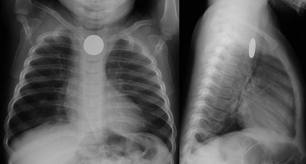 What is the most common foreign body (after food)  that gets stuck in children?  You guessed it...coins.

Anonymous said…
What can be done to help the child who swallowed the battery?
September 26, 2010 at 8:30 PM

Unknown said…
just linked this article on my facebook account. it’s a very interesting article for all.
doctors online
September 26, 2010 at 10:29 PM

CaShThoMa said…
I've seen an elderly man aspirate a partial plate denture into the right main stem bronchus. He developed fever and malaise/weakness and was taken to the ER where a chest film told the story. The denture was removed by bronchoscopy the same day and he recovered completely with a course of antibiotics. He was 90 years old at the time.

KM said…
Very strange coincidence happened this morning when I was eating breakfast and I was about to swallow but felt something that didn't feel right, and thought about reading your blog last night so I stopped myself from swallowing to find out, a piece of my tooth had broken off.
September 27, 2010 at 7:51 PM

healthy tips said…
Nice to this article. Thanks for all information you have collected and presenting us.
September 28, 2010 at 2:06 AM

health shop said…
Oh, it must be removed immediately. This article keeps reminding is to keep things that can be swallowed away from our children.
September 28, 2010 at 11:33 PM

linkwheel said…
I used to be wondering if you want to be a guest poster on my web site? and in trade you may include a link your submit? Please reply whenever you get a chance and I will ship you my contact particulars - thanks. Anyway, in my language, there will not be much good supply like this.
March 30, 2011 at 9:19 PM

link wheel said…
I was questioning what is up with that bizarre gravatar??? I do know 5am is early and I'm not wanting my finest at that hour, but I hope I don't seem like this! I would nonetheless make that face if I am asked to do a hundred pushups. lol Anyway, in my language, there aren't much good supply like this.
March 30, 2011 at 11:41 PM

sim so dep said…
Thanks for taking the time to discuss this, I feel strongly about it and love learning more on this topic. If possible, as you gain expertise, would you mind updating your blog with more information? It is extremely helpful and beneficial to your readers.
March 31, 2011 at 2:36 AM

so dep said…
Have you ever thought-about adding extra videos to your blog posts to maintain the readers extra entertained? I mean I just read by way of your complete article of yours and it was fairly good but since I am more of a visible learner,I found that to be extra useful effectively let me know how it seems! I love what you guys are all the time up too. Such intelligent work and reporting! Sustain the good works guys I've added you guys to my blogroll. It is a great article thanks for sharing this informative information.. I'll visit your blog recurrently for some latest post. Anyway, in my language, there usually are not a lot good supply like this.
March 31, 2011 at 7:28 PM

sim so dep said…
I would nonetheless make that face if I am asked to do a hundred pushups. lol Anyway, in my language, there aren't much good supply like this.
July 9, 2011 at 4:36 AM

www.palencia-3d.com said…
Really effective information, much thanks for the article.
October 7, 2011 at 11:15 AM

sim so dep said…
Oh, it must be removed immediately. This article keeps reminding is to keep things that sim số đẹp can be swallowed away from our children.
December 16, 2011 at 5:51 AM

sim số đẹp said…
I feel is basically important. I dont know if you happen to didnt suppose that your phrases could maintain everyones attention, however you had been wrong. Anyway, in my language, there aren't a lot good source like this.
December 31, 2011 at 12:33 AM

Sim 10 so said…
Can I make a suggestion? I believe youve received one thing good here. However what if you added a couple links to a page that backs up what youre saying? Or perhaps you might give us something to look at, something that would join what youre saying to something tangible? Only a suggestion. Anyway, in my language, there will not be a lot good source like this.
January 6, 2012 at 9:31 PM

Sim viettel 10 so said…
I used to be wondering what's up with that bizarre gravatar??? I know 5am is early and I am not looking my best at that hour, however I hope I don't appear to be this! I'd nonetheless make that face if I am asked to do 100 pushups. lol Anyway, in my language, there will not be a lot good supply like this.
January 15, 2012 at 11:58 AM

Sim viettel 10 so said…
Thank you for the wise critique. Me & my neighbour have been making ready to perform a little research about that. We acquired a great e book on that matter from our native library and most books the place not as influensive as your information. I am very glad to see such info which I used to be searching for a protracted time.This made very glad! Anyway, in my language, there aren't much good source like this.
February 4, 2012 at 6:11 AM

Sim viettel so dep said…
Improbable submit! This could aid a number of individuals discover out about this matter. Do you want to incorporate video clips together with these? It may undoubtedly assist out. Your motive was spot on and owing to you; I in all probability will not have to describe everything to my pals. I can merely direct them here. Anyway, in my language, there should not a lot good source like this.
February 5, 2012 at 12:22 AM