Henrietta Lacks and Her Immortal Cells 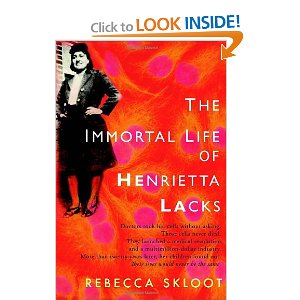 If you like science, true history and an engaging story, pick up the new book by journalist Rebecca Skloot, The Immortal Life of Henrietta Lacks and prepare for a great read.  I knew nothing about the young black woman whose cells were taken back in 1951 by a scientist at Johns Hopkins Hospital and how those cells have revolutionized modern cell biology and research.

The HeLa (named after HEnrietta LAcks) cells were taken as she lay dying on the "colored" ward at Johns Hopkins Hospital of aggressive cervical cancer at age 30. Everyone who studies basic cell biology has heard of HeLa cells because they were the first human cell line to be successfully grown in culture and they are alive today.  HeLa cells were sent to researchers all across the globe and have been used to develop the polio vaccine, viruses, cloning, gene mapping and in-vitro fertilization.  Billions of the same immortal HeLa cells are used by researchers fighting cancer, multiple sclerosis, heart disease and diabetes.

Yet few people know anything about the woman who worked as a tobacco farmer and was buried in an unmarked grave.  Author Rebecca Skloot takes the reader on a journey that starts in 1951 and takes us through the discovery of Henrietta's real identity in the 1970's.  Henrietta Lacks had a life. She had five children and brothers and a husband who knew nothing of her immortal cells and how they were changing the world.  As the author became obsessed with the story, she researched and sought out the family and her discovery changed their lives as well.

The story is somewhat shocking as the reader learns how blacks were treated by the medical establishment in the Jim Crow South.  Equally surprising is the fact that biologic tissue is being used today in the same way, with the "patient" rarely knowing.   No permission was granted for the harvesting of the HeLa cells and no information was ever given to the family until Rebecca Skloot helped them learn the true story as she learned it herself in research for the book.  The family that cannot afford health insurance has never had any benefit from the multimillion-dollar industry selling human biological materials that came from Henrietta's cells.

I couldn't put Henrietta Lacks and Her Immortal Cells down.  The author tells the Lack family story with compassion and stark reality.  It reads like fiction but is researched like investigative reporting.  The story speaks for itself.  There are no victims here.  There are no heroes.  There is only a human interest story that lives today, just like Henrietta's cells, and it is high time it is known by all.

KM said…
Wow, thank you for this great book review! I saw that it was on the NYT Best Sellers List for 33 weeks but didn't know what it was about or who she was. Sounds like a educational and fascinating read with an ethical medical controversy. I didn't know cells could be taken today without permission from the patient or family. It is the kind of book I would be interested in reading, thanks for sharing this.
December 27, 2010 at 6:29 PM

An aside...yes, Blacks were treated horribly in the South...however, the North was not much better at the time...nor were other parts of the Country. i am married to a(n) Historian who did his Master's on Southern Black Slavery....yes, there was Slavery in the North as well, the reason it died out sooner had much more to do with Industry than morality.
December 28, 2010 at 6:56 AM

linkwheel said…
Glorious info here. This interesting put up made me smile. Perhaps should you throw in a few footage it'll make the whole thing extra interesting. Anyway, in my language, there are not much good supply like this.
March 30, 2011 at 7:00 PM

link wheel said…
Howdy, i learn your weblog occasionally and that i own a similar one and i was just wondering if you get loads of spam feedback? If that's the case how do you forestall it, any plugin or anything you possibly can advise? I get a lot lately it's driving me mad so any help may be very a lot appreciated. Anyway, in my language, there usually are not a lot good supply like this.
March 30, 2011 at 7:09 PM

sim so dep said…
Wonderful learn, I just handed this onto a colleague who was doing a little analysis on that. And he truly purchased me lunch as a result of I found it for him smile So let me rephrase that: Thanks for lunch! Anyway, in my language, there are usually not much good source like this.
March 31, 2011 at 2:21 AM

so dep said…
Daniel, yea I can see what you did there. I actually favored that part, however hehe I'm not that harsh like my dad with these things. He always tells me crazy stories again within the day and calls me a loser. I guess it is time I transfer out of my parents' basement LOL. Aaanyways, what about you? what does your dad think xD" Anyway, in my language, there should not much good source like this.
March 31, 2011 at 2:37 AM

bp claims process said…
I've to say, I dont know if its the clashing colors or the bad grammar, but this blog is hideous! I mean, I dont wish to sound like a know-it-all or anything, but might you will have probably put slightly bit extra effort into this subject. Its really interesting, but you dont characterize it well at all, man. Anyway, in my language, there are usually not a lot good supply like this.
April 25, 2011 at 1:55 AM

bp claims said…
I was questioning what is up with that bizarre bp claims??? I know 5am is early and I'm not wanting my finest at that bp claims, however I hope I do not seem like bp claims! I'd nonetheless make that bp claims if I am requested to do a hundred bp claims. Anyway, in my language, there should not much good source like this bp claims.
April 25, 2011 at 2:47 AM