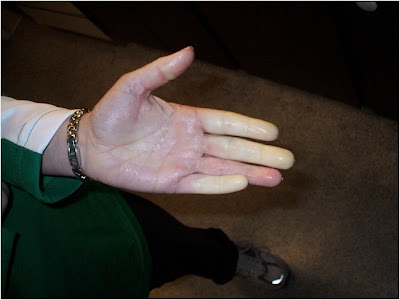 Thanks to modern technology (iphone) a picture is worth a thousand words in diagnosing a condition.  This young woman had been exercising outside by the Golden Gate Bridge in San Francisco (temp a chilly 49º F) and when she finished her hand looked like this.  It felt numb and began stinging when she ran hot water on it.

What is seen is classic Raynaud's disease.  It is a condition that causes some ares of the body like the fingers, toes, tips of nose and ears to have limited blood circulation in response to cold temperatures.  It affects women more than men and the skin can turn blue or white or purple in blotchy areas.  It is common to feel swelling and stinging as the circulation improves (such as immersing in hot water).  An attack can last several minutes to hours.

With Raynauds, there is a vasospasm of the small blood vessels that go to the digits.  This limits blood supply which causes the skin to turn pale.  Cold temperatures are most likely to trigger an attack but emotional stress can also cause it.  We think it is an inherited disorder.

Most of the time, Raynaud's does not require treatment.  Patients learn to avoid sudden cold (like refrigerators) and to wear gloves when it is cold outside.   If the attacks are frequent or severe, medications that dilate the blood vessels can be prescribed.  These are medications like nifedipine, amlodipine and felodipine.

The iphone saved her from a visit to the emergency department (where it is likely the vasoconstriction would have already resolved) or the office.

This is a form of "telemedicine".

(Photo used with permission and gratitude)

Connie said…
Thanks, Dr. T. I suspected that I have this from the ways my fingers are after being in the cold. Seeing this picture and hearing your description makes me sure of it. My father had it too.

tracy said…
Hey, Daisy, i have it too. i wonder how common it is.... cute Christmasy pic!

KM said…
Dr.Brayer, do you know why the ring finger doesn't seem to be affected like the surrounding fingers are in this pic?
December 17, 2010 at 8:33 AM

Anonymous said…
Amazing photo. I too think I have Raynauds as I get some blue splotches on my hands in the cold. Thanks so much for the info.
December 17, 2010 at 11:03 AM

linkwheel said…
I was wondering should you can be fascinated about changing into a guest poster on my weblog? and in trade you could possibly put a link the submit? Please let me know once you get a chance and I will send you my contact particulars - thanks. Anyway, in my language, there should not a lot good source like this.
March 30, 2011 at 7:11 PM

link wheel said…
I used to be questioning if you would like to be a visitor poster on my web site? and in trade you may embody a hyperlink your post? Please reply when you get an opportunity and I will send you my contact particulars - thanks. Anyway, in my language, there aren't much good source like this.
March 30, 2011 at 8:46 PM

sim so dep said…
Hello, I saw a 3 of your attention-grabbing posted posts and wished to ask if you could be considering reciprocal pages? Crew have blog about alexis texas ass! Anyway, in my language, there are usually not much good supply like this.
March 31, 2011 at 2:35 AM

so dep said…
Improbable submit! This could aid a number of individuals discover out about this matter. Do you want to incorporate video clips together with these? It may undoubtedly assist out. Your motive was spot on and owing to you; I in all probability will not have to describe everything to my pals. I can merely direct them here. Anyway, in my language, there should not a lot good source like this.
March 31, 2011 at 2:42 AM

bp claims said…
Your bp claims is fine. I just wish to comment on the design. Its too loud. Its doing way an excessive bp claims of and it takes away from bp claims what youve received to say --which I feel is basically important bp claims . I dont know if you happen to didnt suppose that your phrases could maintain everyones bp claims , however you had been wrong. Anyway, in my bp claims , there aren't a lot good source like this bp claims .
April 25, 2011 at 3:08 AM

sim so dep said…
Dr.Brayer, do you know why the ring finger doesn't seem to be affected like the surrounding fingers are in this pic?
December 16, 2011 at 6:06 AM

sim số đẹp said…
I feel is basically important. I dont know if you happen to didnt suppose that your phrases could maintain everyones attention, however you had been wrong. Anyway, in my language, there aren't a lot good source like this.
December 31, 2011 at 12:35 AM

Sim 10 so said…
Can I make a suggestion? I believe youve received one thing good here. However what if you added a couple links to a page that backs up what youre saying? Or perhaps you might give us something to look at, something that would join what youre saying to something tangible? Only a suggestion. Anyway, in my language, there will not be a lot good source like this.
January 6, 2012 at 9:37 PM

Sim viettel 10 so said…
I used to be wondering what's up with that bizarre gravatar??? I know 5am is early and I am not looking my best at that hour, however I hope I don't appear to be this! I'd nonetheless make that face if I am asked to do 100 pushups. lol Anyway, in my language, there will not be a lot good supply like this.
January 16, 2012 at 12:13 AM

Sim viettel so dep said…
Improbable submit! This could aid a number of individuals discover out about this matter. Do you want to incorporate video clips together with these? It may undoubtedly assist out. Your motive was spot on and owing to you; I in all probability will not have to describe everything to my pals. I can merely direct them here. Anyway, in my language, there should not a lot good source like this.
February 5, 2012 at 12:33 AM