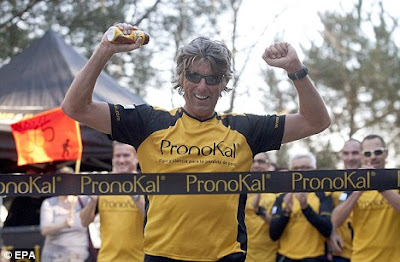 I would not have believed it was possible, but Stefaan Engels, a 49 year old Belgian man has run his 365th marathon in 365 days.  Mr. Engels has set a new record after running 9,569 miles across seven countries.  He finished his final race in Barcelona, Spain. He ran races in the UK, Spain, Portugal, Belgium, Canada, Mexico and the U.S.

Stefaan Engels also holds the world record for completing the most "Ironman" Triathlons in a year.  He did 20 in 2007/8.

This is his second attempt at the 365 day marathon running challenge.  The first time he injured his leg.  This year he attributes his success to running a slow pace over each 26.2 mile marathon.  He averaged 4 hours per marathon day.  Four hours!!

He stated "I wanted to inspire people by showing that if I could run a marathon a day for an entire year, that anyone could run or bike a little each day or do something about their weight problem."  I would certainly say he succeeded at being inspiring.

I'm going to just stop typing, take a rest and ponder this for awhile.

Amazing, endurance that he can do theses back to back with no recovery time. Recovery rest and relaxation time is usually suggested for your body's health. I will send this to a couple of my Marathon friends. One has done the NYC Marathon 33 years in a row.

Jonathan said…
And the Toronto Sun reports that Engels is an "asthmatic runner who was once told by doctors to avoid exercise completely". Ain't life grand!
February 10, 2011 at 9:09 AM

Toni Brayer, MD said…
Anon: thanks, it was a typo and now corrected.
Kellie: Congrats on your amazing marathon fetes too. The thought of it makes me want to rest yet again!
February 10, 2011 at 8:58 PM

Dr. Carrie said…
I'm really interested in the physiology of this "exercise". Was anyone studying his body's reaction during all this?

abendmode said…
This comment has been removed by a blog administrator.
February 15, 2011 at 1:54 AM

Motorcycle Mirrors said…
This comment has been removed by a blog administrator.
February 15, 2011 at 8:03 PM

wedding photographers bristol said…
This comment has been removed by a blog administrator.
February 16, 2011 at 2:19 AM

link wheel said…
Howdy, i learn your weblog often and i personal an identical one and i used to be just wondering in case you get loads of spam comments? If so how do you forestall it, any plugin or anything you possibly can advise? I get a lot lately it's driving me mad so any assistance is very a lot appreciated. Anyway, in my language, there aren't much good supply like this.
March 29, 2011 at 8:43 PM

linkwheel said…
There are definitely a lot of details like that to take into consideration. That may be a great point to deliver up. I supply the ideas above as normal inspiration however clearly there are questions just like the one you deliver up where an important thing can be working in trustworthy good faith. I don?t know if greatest practices have emerged around issues like that, but I am sure that your job is clearly identified as a fair game. Anyway, in my language, there are usually not much good source like this.
March 29, 2011 at 10:56 PM

so dep said…
Please tell me it worked proper? I dont want to sumit it once more if i wouldn't have to! Both the blog glitced out or i'm an idiot, the second choice doesnt shock me lol. thanks for an excellent weblog! Anyway, in my language, there are not much good supply like this.
March 30, 2011 at 12:07 AM

sim so dep said…
Completely perceive what your stance on this matter. Although I would disagree on some of the finer particulars, I believe you did an superior job explaining it. Certain beats having to research it on my own. Thanks. Anyway, in my language, there aren't a lot good supply like this.
March 30, 2011 at 1:12 AM

gccf said…
There are certainly lots of particulars like that to take into consideration. That is a great point to deliver up. I offer the thoughts above as basic inspiration but clearly there are questions just like the one you convey up the place crucial thing will be working in sincere good faith. I don?t know if best practices have emerged around things like that, however I am sure that your job is clearly recognized as a good game. Anyway, in my language, there aren't much good supply like this.
April 25, 2011 at 12:47 AM

gulf coast claims facility said…
Daniel, yea I can see what you did there. I actually liked that part, but hehe I'm not that harsh like my dad with these things. He at all times tells me crazy stories again in the day and calls me a loser. I assume it's time I transfer out of my parents' basement LOL. Aaanyways, what about you? what does your dad assume xD" Anyway, in my language, there usually are not much good source like this.
April 25, 2011 at 12:51 AM

bp claims process said…
Howdy, i learn your weblog occasionally and that i own a similar one and i was just wondering if you get loads of spam feedback? If that's the case how do you forestall it, any plugin or anything you possibly can advise? I get a lot lately it's driving me mad so any help may be very a lot appreciated. Anyway, in my language, there usually are not a lot good supply like this.
April 25, 2011 at 1:06 AM

bp claims said…
I was questioning in case you can be interested by changing into a guest poster on my weblog? and in exchange you could possibly put a hyperlink the post? Please let me know once you get an opportunity and I'll send you my contact details - thanks. Anyway, in my language, there are not much good source like this.
April 25, 2011 at 1:37 AM