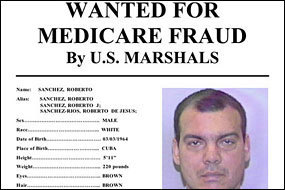 I am always happy when I read about fraudulent doctors, nurses and businessmen getting busted.  Medicare is, unfortunately, a program that lends itself to crooks.  The more of these crooks that get prosecuted and sent to jail, the happier I am.  Each of these busts should be made public.  This time Federal authorities have charged over 100 doctors, nurses and physical therapists with massive Medicare fraud in Miami, Los Angeles, Dallas, Houston, Detroit, Chicago, Brooklyn, Tampa and Baton Rouge.

These crooks billed Medicare more than $225 million for services that were not performed.  One Brooklyn proctologist billed $6.5 million for phony hemorrhoid removals.  He claimed he performed 10 on one patient alone.  Impossible!   Are there even that many potential hemorrhoids in Brooklyn?  A podiatrist billed Medicare $700,000 for toenail removals.  The stupid guy said he removed 20 nails on 3 toes of one patient. 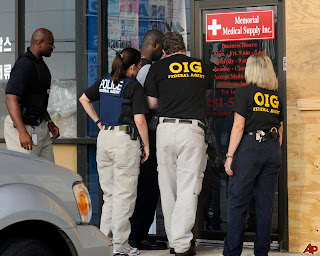 Three physical therapy clinics that were run by an organized network of Russian immigrants billed $57 million for elderly patients that had no PT.   This involved the usual recruitment and kickback to elderly patients just to get their Medicare number.

Now that Medicare is so large and cumbersome, we need to strengthen the enforcement and applications for providers.  How about criminal background checks for provider applicants?  Unfortunately, right now  a fraudulent clinic can shut down in one locale and open a new operation and begin billing all over again.

As a taxpayer I support strict enforcement and prosecution.  As a primary care physician who saw her reimbursement cut this year to $84.00 for taking care of a complicated medicare patient, I am outraged at the waste.

KM said…
Why is Medicare paying" Christian Science practitioners"? Are any of them a licensed medical professional as well a being part of that religion?
February 18, 2011 at 3:20 PM

gradydoctor said…
Just catching up with the posts! Great stuff--I agree that the scanners make it hard on us all!

Felcy said…
Really well done for the blog.these are so sweet and pretty!

Michael Kirsch, M.D. said…
You are on point,as usual. Fraud is an outrage, but it is unneccessary medical care that is bleeding the system. While I also support vigorous enforcement, this is not where most of the wasted money is.
February 20, 2011 at 6:45 AM

Canadian Drugs said…
Unfortunately, right now a fraudulent clinic can shut down in one locale and open a new operation and begin billing all over again.
February 25, 2011 at 8:29 PM

Unknown said…
Chances are the calcium supplement you are taking now is a rock source of calcium. The label will say "calcium carbonate", which is nothing more than limestone. AlgaeCal Plus contains an organic, plant-sourced calcium form derived from a unique South American marine algae called Algas Calcareas™.
March 7, 2011 at 10:18 AM

link wheel said…
Wonderful learn, I simply passed this onto a colleague who was doing some research on that. And he really bought me lunch because I found it for him smile So let me rephrase that: Thanks for lunch! Anyway, in my language, there are not much good supply like this.
March 29, 2011 at 8:26 PM

linkwheel said…
Your weblog is fine. I just wish to comment on the design. Its too loud. Its doing way an excessive amount of and it takes away from what youve received to say --which I feel is basically important. I dont know if you happen to didnt suppose that your phrases could maintain everyones attention, however you had been wrong. Anyway, in my language, there aren't a lot good source like this.
March 29, 2011 at 9:52 PM

so dep said…
I've been attempting to Achieve access to this website for a while. I used to be using IE then after I tried Firefox, it worked simply advantageous? Just needed to carry this to your attention. This is really good blog. I've a bunch myself. I actually admire your design. I do know this is off subject but,did you make this design yourself,or purchase from someplace? Anyway, in my language, there are not a lot good source like this.
March 30, 2011 at 12:00 AM

sim so dep said…
There are certainly numerous details like that to take into consideration. That is a great point to bring up. I offer the ideas above as general inspiration but clearly there are questions like the one you convey up where a very powerful factor might be working in honest good faith. I don?t know if finest practices have emerged round issues like that, however I am certain that your job is clearly identified as a fair game. Anyway, in my language, there will not be a lot good supply like this.
March 30, 2011 at 12:57 AM

buy contextual links said…
Can I make a suggestion? I feel youve acquired one thing good here. However what if you happen to added a pair links to a web page that backs up what youre saying? Or perhaps you possibly can give us something to take a look at, something that would join what youre saying to one thing tangible? Only a suggestion. Anyway, in my language, there will not be a lot good supply like this.
April 18, 2011 at 7:26 PM

gccf said…
Hello, I saw a three of your attention-grabbing posted posts and needed to ask in the event you would be interested in reciprocal pages? Crew have weblog about alexis texas ass! Anyway, in my language, there usually are not much good supply like this.
April 25, 2011 at 12:42 AM

gulf coast claims facility said…
I have been trying to Gain entry to this website for a while. I was using IE then once I tried Firefox, it worked just effective? Simply needed to convey this to your attention. This is actually good blog. I have a bunch myself. I really admire your design. I know that is off matter however,did you make this design your self,or purchase from somewhere? Anyway, in my language, there usually are not much good supply like this.
April 25, 2011 at 12:46 AM

bp claims process said…
Wonderful learn, I simply handed this onto a colleague who was doing some research on that. And he actually purchased me lunch because I discovered it for him smile So let me rephrase that: Thanks for lunch! Anyway, in my language, there should not much good source like this.
April 25, 2011 at 12:56 AM

bp claims said…
Hi, i read your weblog often and that i personal a similar one and i was just questioning in the event you get a lot of spam feedback? If that's the case how do you prevent it, any plugin or anything you can suggest? I am getting so much recently it's driving me mad so any help could be very a lot appreciated. Anyway, in my language, there aren't a lot good supply like this.
April 25, 2011 at 1:26 AM

Canadian Pharmacy said…
Very nice blog.
I appreciate you for this.
In these blog there are so many things which is really very great and one of the great functionality these all things are cool to know about it.
May 10, 2011 at 3:23 AM