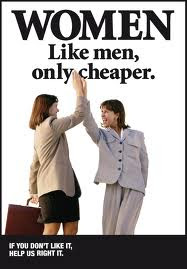 A new study published in Health Affairs reports that female doctors fresh out of training are paid significantly less than their male counterparts.  The gender gap has been getting worse since 1999 and is now $16,819, up from $3,600 in 1999.   Readers, we are definitely going the wrong way here!  Women doctors are being paid less than men.

The widening pay gap cannot be attributed to the specialty they choose because the researchers controlled for that aspect.   Even when they account for specialty and hours and other factors, the gap remains.  The same gap exists for women in primary care as in other specialties.  Female heart surgeons were paid $27,103 less than males.  Female ENT doctors made $32,207 less than male doctors.  The women who specialized in pulmonary disease made a shocking $44,320 less than their male counterparts.

We can only speculate why this is happening.  The most obvious answer is;  "Yes, there truly is gender pay discrimination."  No-one really wants to consider that or admit it but the facts seems to speak for themselves.   Other considerations are that women  fail to negotiate salaries as well as men.  That is a skill most women do not develop and most starting salaries are negotiated within a certain range.  Women may just accept the first (low-ball) offer made,  while their male counterparts would hold out for more.

Another thought is that women are trading pay for less call time or a better lifestyle.  I doubt that is the case because the authors controlled for hours worked.  Frankly this trend of gender difference in pay cannot readily be explained by any of these excuses.

I will be the first to admit that women have come a long way.  But this study is disheartening and shows we may be heading back in the wrong direction.

Michael Kirsch, M.D. said…
I'd like to think there is an explanation besides gender discrimination, but your post is persuasive. Wonder if this data and conclusions has been replicated elsewhere.
February 4, 2011 at 8:02 AM

Toni Brayer, MD said…
Michael Kirsch,M.D.: Women earn 77¢ for every dollar earned by men in equal positions. Women earned less than men in all 20 industries and 25 occupation groups surveyed by the Census Bureau in 2007.

I have read a great deal of commentary on this physician study and I am amazed at the denial and excuses people are submitting...even though the authors have controlled for all of those factors.

The only excuse that makes some sense is that women don't bargain effectively and they sell themselves short. Same work-less pay.
February 4, 2011 at 8:52 AM

Liz said…
I thought the struggle for equality in the workplace was a resolved issue. How in 2011 are women DOCTORS getting paid such significantly smaller salaries? This is disgusting.
February 4, 2011 at 11:55 AM

Generic Viagra said…
This comment has been removed by a blog administrator.
February 4, 2011 at 10:56 PM

BrainDame said…
The gap is real, the gap exists. To think this issue no longer exists would be to have head in sand...it is better, much better in some aspects but pay has always lagged behind.
Thanks for highlighting this important study.
February 6, 2011 at 7:05 PM

Paula Dhanda, MD said…
I have long thought that medical schools should offer education in business. Perhaps this would help women to bargain more effectively.
February 9, 2011 at 8:15 AM

link wheel said…
I was more than happy to seek out this site.I wanted to thank you for this nice read!! I definitely having fun with each little bit of it and I have you bookmarked to check out new stuff you post. Anyway, in my language, there usually are not a lot good source like this.
March 29, 2011 at 8:54 PM

so dep said…
Took me time to read all of the comments, but I really loved the article. It proved to be very useful to me and I am positive to all the commenters right here! It is always good when you can't solely be informed, but additionally engaged! I am sure you had pleasure writing this article. Anyway, in my language, there aren't a lot good supply like this.
March 30, 2011 at 12:16 AM

sim so dep said…
I've to say, I dont know if its the clashing colors or the bad grammar, but this blog is hideous! I simply, I dont wish to sound like a know-it-all or anything, however may you will have probably put just a little bit extra effort into this subject. Its really interesting, however you dont characterize it well at all, man. Anyway, in my language, there usually are not much good supply like this.
March 30, 2011 at 1:17 AM

gccf said…
Daniel, yea I can see what you did there. I actually favored that part, however hehe I'm not that harsh like my dad with these things. He always tells me crazy stories again within the day and calls me a loser. I guess it is time I transfer out of my parents' basement LOL. Aaanyways, what about you? what does your dad think xD" Anyway, in my language, there should not much good source like this.
April 25, 2011 at 12:49 AM

gulf coast claims facility said…
Your weblog is fine. I simply need to touch upon the design. Its too loud. Its doing way an excessive amount of and it takes away from what youve bought to say --which I feel is de facto important. I dont know if you happen to didnt suppose that your phrases could hold everyones attention, however you have been wrong. Anyway, in my language, there usually are not a lot good source like this.
April 25, 2011 at 12:58 AM

bp claims process said…
I was very happy to seek out this site.I wanted to thank you for this great learn!! I undoubtedly enjoying every little bit of it and I have you bookmarked to check out new stuff you post. Anyway, in my language, there aren't a lot good supply like this.
April 25, 2011 at 1:15 AM

bp claims said…
Resources just like the one you mentioned right here might be very useful to me! I will put up a hyperlink to this page on my blog. I'm certain my guests will find that very useful. Big thanks for the helpful info i discovered on Area Information Anyway, in my language, there should not a lot good supply like this.
April 25, 2011 at 1:42 AM

Buy Clomid Online said…
Clomid is an non-steroid anti-estrogen. Approach of its action consists in a specific binding with receptor for estrogen in ovary and buy clomid no prescription. In patients with low estrogen levels in creature it causes estrogen effect and in ones with record estrogen levels it causes anti-estrogen make.
August 4, 2011 at 6:17 AM

puertas metalicas exterior said…
This can't have effect in actual fact, that's exactly what I suppose.
August 29, 2011 at 3:51 PM

Buy Cheap Valium said…
Valium belongs to the impose same class of benzodiazepines, buy cheap Valium no prescription, it tends to trigger uncommonly sleepiness and can start austere consequences if applied onwards of driving or working with tubby equipment. Discovered excellent up to now in handling depressive disorders and hunger issues, buy Valium without prescription not no more than carry positive effects but additionally attired in b be committed to a trail of withdrawal symptoms when finished. Both make evident unpleasant signs and symptoms if stopped abruptly.
September 1, 2011 at 3:33 AM

viagra online sales said…
I am thoroughly convinced in this said post. I am currently searching for ways in which I could enhance my knowledge in this said topic you have posted here. It does help me a lot knowing that you have shared this information here freely. I love the way the people here interact and shared their opinions too. I would love to track your future posts pertaining to the said topic we are able to read.
December 13, 2011 at 9:41 PM